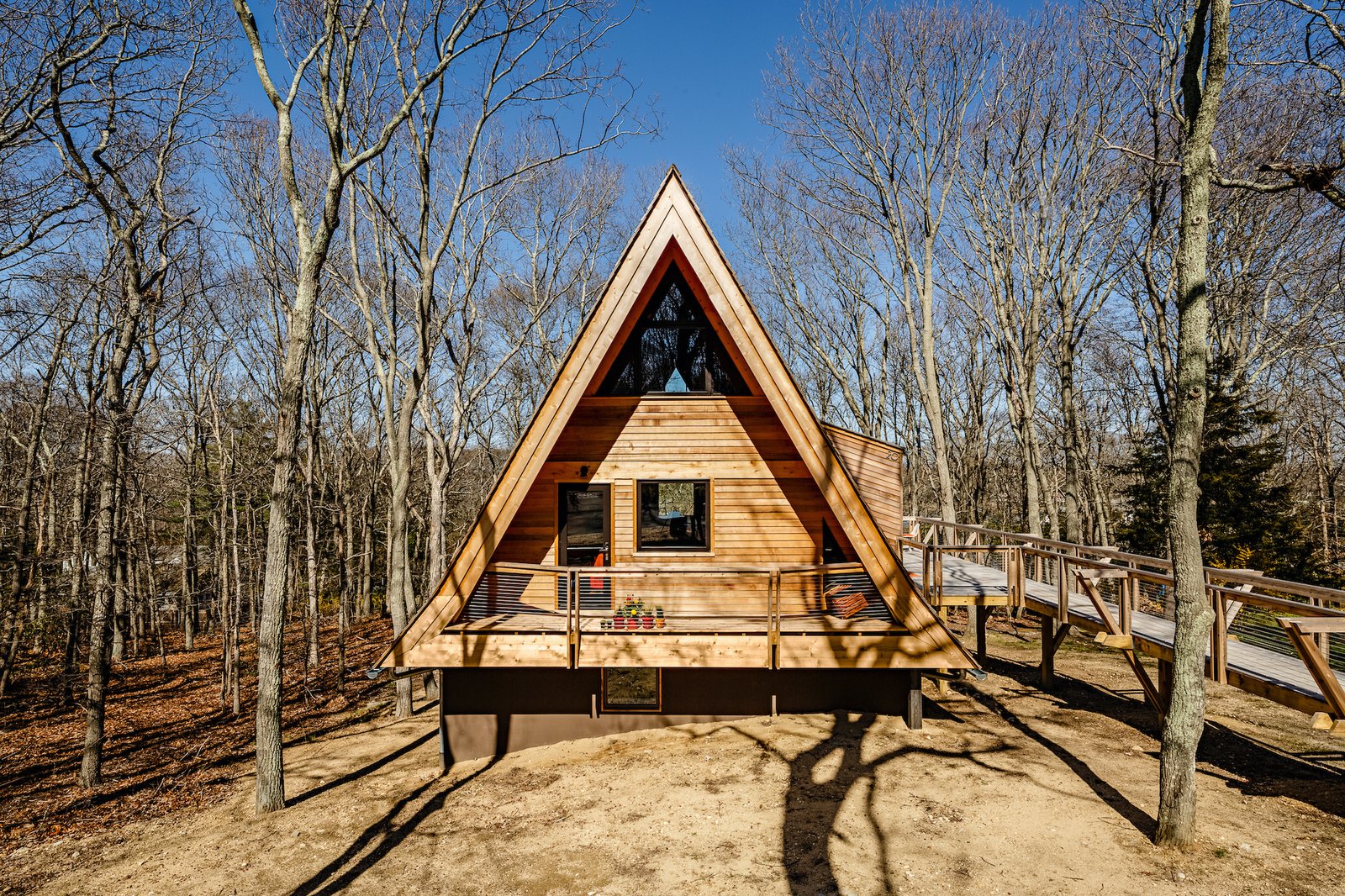 Architect Edgar Papazian and his wife, Michelle, weren’t immediately sure how to make the dilapidated A-frame cabin they’d purchased in Sag Harbor, Long Island, more comfortable for their family of four.  “When we purchased the cheapest house in the zip code, it was simply shelter after a tumultuous period,” says Edgar, who runs Doon Architecture. “As we lived in it over the next year, I was able to examine the carcass of the thing we had bought and gradually figure out how it could work better for us.”

“The ease in having yourself as a client is offset by the limitations you impose on yourself financially and emotionally,” says Edgar. “Your own home is a place created as an extension of your identity, but it also has to fulfill practical functions—and I found I had to edit myself mercilessly. We also happen to live in a place where construction is very expensive, which made this build incredibly challenging and nerve-wracking.”

The home is perched on the side of a large hill that hugs the coastline of the Peconic Bay; the beach is within short walking distance. “The house is nestled in a wood of small oak trees, and from certain angles appears to be perched in the canopy,” says Edgar. “This idea is reinforced by views from the main level of the home to the north, in which only leaves can be seen.”

The home was built from a kit in 1965, and had been in the same family ever since. When the Papazians bought it, it hadn’t been updated in some years, and there was a partially finished basement project that had been abandoned. With no insulation or modern mechanical systems, it was also drafty and chilly.

“It had a little rabbit warren of bedrooms on the main level with an unsatisfactory living area, a ridiculous stair to a dreary loft, and a tiny galley kitchen with virtually no counter space, and a scary stair to the rear yard from the rear deck,” says Edgar. “We called it our New York City apartment house owing to its layout.”

Because the budget for the renovation was so tight, Edgar ruled out the option of expansion from the beginning. Instead, he rearranged the entrance and living space, added a series of mezzanine levels, and finished the basement.

On the main level, a poorly constructed winterized porch—which functioned as the main entry—was removed and a new entry was created by building a small cedar footbridge from the road. This doubles as a modest deck that overlooks the rear of the property. An entry vestibule leads directly to the main living area, where all the interior partitions were removed to create a combined living and dining space with a triangular projection that contains a kitchen and small bathroom.

A series of mezzanines was created above this space to provide a retreat, as well as a home office for Edgar’s architecture practice. “As I was concerned about maintaining the wholeness of the space, I took pains to construct the lofts and catwalk with spaced Douglas fir boards to allow light and air to circulate,” he says. “This was the last part of the renovation, and we were most financially depleted at that point—but it had to be done to make the interior space work, and I’m so glad we did it when it hurt the most.”

From the beginning, Edgar knew he would need to finish the partially completed basement, which had tall ceilings and access to good natural daylight, to create enough space for his family. The existing basement only had access from outside, however, and one of the main challenges was to create circulation within the interior of the small home to provide internal access to the downstairs living area and bedrooms.

“The solution was the smallest code spiral stair we could manage between levels, in the dead center of the house,” says Edgar. This new lower level has three bedrooms on the corners of the foundation, a bathroom, utility closet, and a cozy family room at its heart.

The total cost of the renovation was around $300,000. “For the Hamptons, this is a rounding error on any typical project,” says Edgar. “I added a tremendous amount of sweat equity to the project, mostly finishing and anything unskilled, when I wasn’t working in my then full-time job.”

Throughout the renovation, Edgar was committed to retaining the history and essence of the original home. “We didn’t want to literally whitewash the history and original finish of the house, which was the 50-year-old, UV-exposed, Douglas fir tongue-and-groove boards and built-up rafters of the kit,” he says. “So, I chose to work with the original palette of aged Douglas fir.”

In areas where the use of timber was cost-prohibitive, the architect made “slightly tongue-in-cheek” use of fake woods. For example, the cost-effective laminate on the kitchen countertops that mimics layered wood, or the ceramic tile with wood pattern and color employed in the bathroom.

In the basement, Edgar employed light-colored walls to bounce as much light around the space as possible, and structural grade Oriented Strand Board (OSB) for the floors. “It’s derisively called ‘snot board’ in the industry,” he notes. “But, it is a durable, visually pleasing solution that has aged very well.”

“The renovation coexists with the existing home, without trying to overly differentiate or slavishly copy the original,” says Edgar. “It creates a new-old hybrid structure, with the new working alongside the old without pretending it’s still 1965. I view this project as a historical restoration, of sorts, for our time.”