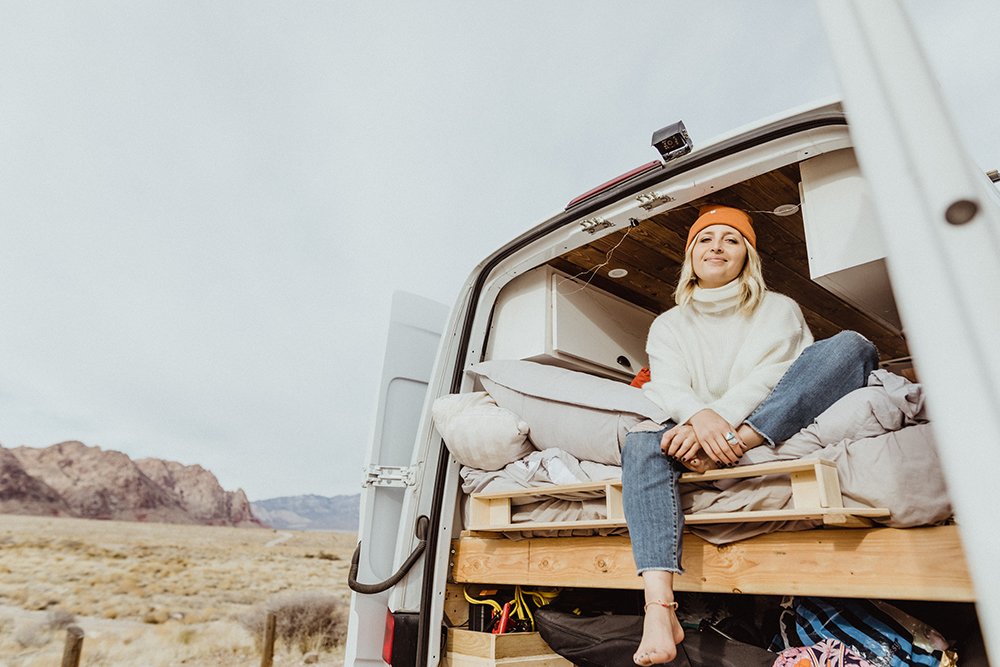 When city life paused full stop in March, many headed outdoors. Bishop, California, a climbing mecca, attracted droves from Los Angeles and the Bay Area. National parks encouraged visitors, as long as they practiced social distancing. But as crowds gathered, officials decided to padlock facilities and cease operations altogether. The van-lifers who live for destinations like Bishop are now struggling with knowing where to be.

“All of my money is in this van,” says Katie Larsen, who fled the Lake Tahoe area with her boyfriend to shelter with a small caravan in the California-Nevada desert. “I have no other house or apartment. I could go to my parents’ place, but their house is filled with my adult siblings. Being back in a family environment would put my pregnant sister-in-law and baby in danger.”

To go home to Oregon, she’d have to fill up at multiple gas stations and use public facilities, exposing herself to potential infection along the way. Sheltering on remote public land, even amidst a small pack of van-life peers, seemed more responsible in spite of dissent from onlookers. “There’s a large community of van-lifers on social media and Instagram, and it’s an easy place to write comments or send DMs when you don’t agree,” says Katie, who’s been told outright to go home.

Some are lucky to have company, but Megan Cable, an accounting professional who works full time from the road, has been sheltering in place alone in Southern Utah for seven weeks now. “I’d love to be with a few other people, but I wanted to stay put until I learn more about what’s going to happen,” she says. Megan, too, feared risking her family’s and others’ health by crossing the country or changing locales.

Aside from staying put, her routine hasn’t changed much. She’s thankful that she still has work, and she can hop on mountain bike trails paces from her van, FaceTime with friends and family, and cook meals or take photos. She minimizes trips to town by stocking up on supplies and groceries. Occasionally, from afar, she greets locals or other van-lifers finding reprieve on Utah’s open lands.

The open-ended travel restrictions pose a lot of uncertainty for a community whose lives are predicated on roaming the country freely. “There’s a chance that travel is gonna be banned for months rather than weeks,” Megan says. “What does it mean when your life depends on travel? That changes everything for van-lifers, and it’s a big question for a lot of people that have gone home. When do they get to go back to the van?”

Ohio native, author, and public speaker Alexa Glazer is eagerly awaiting an answer. Her livelihood relies on traveling state to state, where she speaks at functions on the topic of “living the dream,” a motto her father lived by before he passed six years ago.

Alexa was staying in Encinitas, California, when the gym where she showers closed. Then other public facilities started to shutter. Not knowing to what extent she’d be cut off, her family grew concerned and urged her to return to the Midwest to let the pandemic pass. She parked her van in her family’s driveway.

“Overall, it has been amazing to be back at home with them. My nephew just turned one,” says Alexa. “But it’s definitely a challenge. Everyone puts their two cents in about the van. This definitely makes you question things—the lifestyle. I got used to the unique challenges van life poses, but I like having clean socks,” she laughs.

Another solo van-lifer, Zach Epperson, would park in Mill Valley, California, to hit trailheads on his mountain bike. Between rides, he’d hop on calls as a sales rep for a bicycle company. His workload has since been cut from 40 hours to just six each week, making it difficult to fill the longer and longer daylight hours. A recent jaunt to Mendocino was met with glares and NIMBY sentiments that sent him back to San Francisco, where his loneliness has been compounded.

“I was in Golden Gate Park, sitting in the sun with loads of people walking by—you’d believe nothing was wrong with the world,” he says. “Other days, people look at you funny and cross the street.” Ultimately he’s fine, he says, but he still has to negotiate where and how to shower on a daily basis. Sometimes that means heading to his girlfriend’s house, in spite of distancing mandates.

In many ways, van-lifers are better equipped to take on the conditions created by a pandemic. They are isolated, self reliant, and can live off-grid for days on end. But—as for stationary home dwellers—it’s the looming uncertainty that gives them pause, as all plans are cancelled for the foreseeable future. A cross-country meetup at a national park, the buildout of a brand-new van, or a film chronicling an international excursion—these exciting ventures are now pipe dreams.

“Our big plan was to do Baja to Alaska, and make a documentary about it,” says Sam Johnson, who travels with her cat Cashew. One of the filmmakers, a Nigerian national, had to hustle to get back to the U.S. before the California-Mexico border closed. Sam hurried back from Mexico and headed to California’s Palm Desert to shelter with a group of three other vans. She once emceed van festivals across the U.S., but now she’s lost all work.

Partners and coworkers Emmy Hyde and Lauren Marquardt have always been prepared for this. For them, life in a van means eschewing consumer culture and modern society—less Instagramming, and more howling at the moon in off-grid isolation. Since they already held society at arm’s length—they mock the mainstream by wryly calling cities “Babylon”—not much has changed.

“We’re thriving in south Joshua Tree, camped just before the park entrance on BLM [Bureau of Land Management] land,” Lauren says. “We have a little oasis, everything is in bloom, and it smells amazing—there are flowers everywhere. It’s really the best time to be here. Not too hot, not too cold.”

Even as they rail against institutions—they scoff at worried family members who parrot pandemic statistics from the news—the two return often from the fringes of society, working as skilled contractors so that they can strike back out on the road.

“When it comes to the next gig, that is scary,” admits Emmy. “But when it comes to this lifestyle, you can’t plan anything. We’ve learned to be adaptive, to go with the flow.” The RV they tour in is equipped with solar, they have a large tank for water, and they don’t need to freeze foods as they stick to a vegan diet. In a lot of ways, they’ve already chosen a disaster-proof lifestyle that is now seeing dividends. “Nothing has changed from our day-to-day,” they say. “We feel like we’re in the best position. Our concerns are for other people and their families.”

Stay up to date with how van-lifers are coping with COVID-19 via their Instagram accounts:

Life After COVID-19: How the Pandemic May Reshape the World as We Know It

Furniture Outlet Near Me