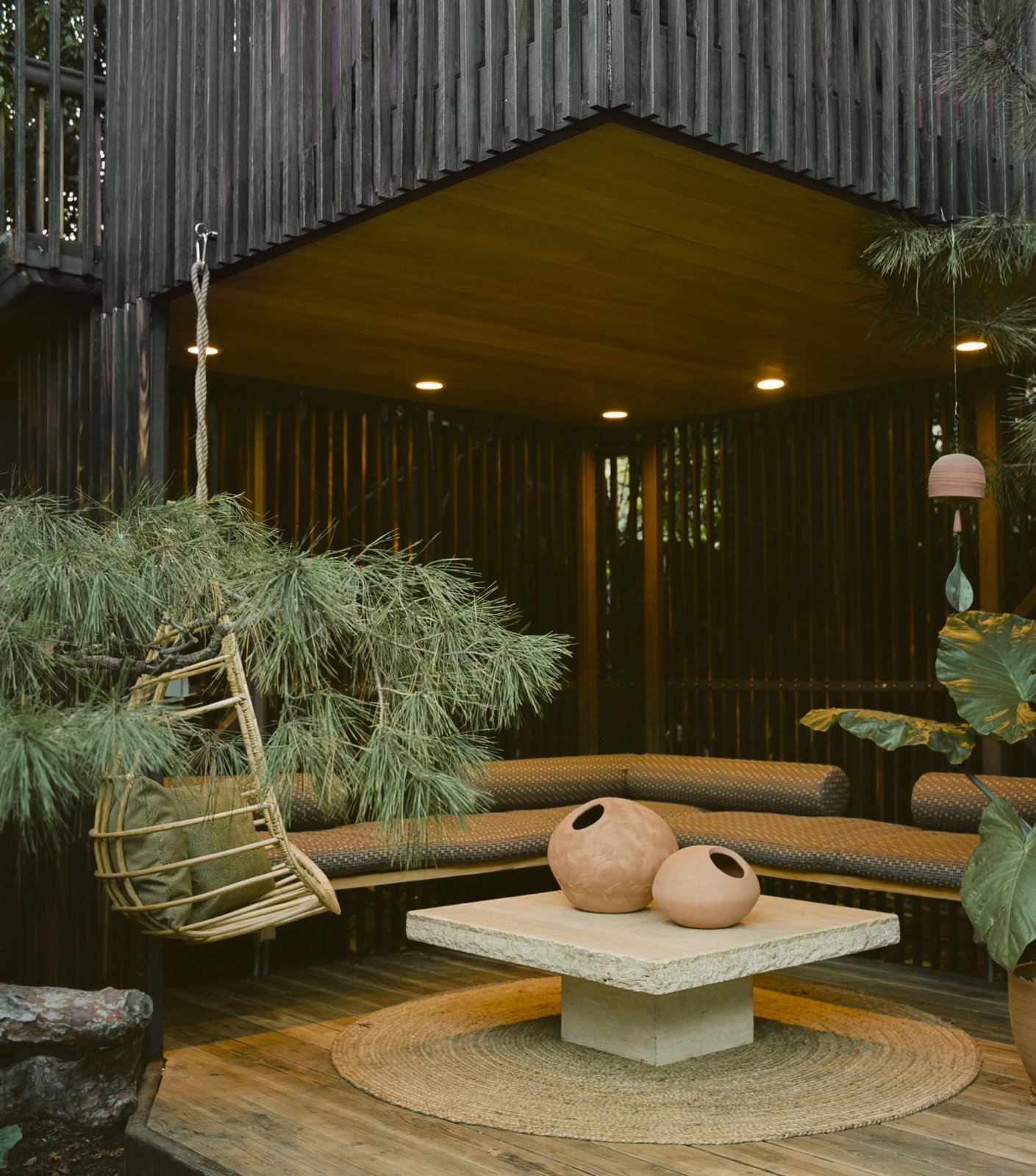 Although entertainment producers Beth Earl and Thomas Benski have lived for several years in a forested canyon near Pacific Palisades, their busy careers prevented them from connecting with their natural surroundings from the comfort of their home. “We’d never touched the backyard,” Earl recalls. “It never fulfilled its true potential.”

After the couple had their daughter, Isla, Earl and Benski began to dream of a family oasis: a backyard that celebrated California’s lush coastal landscape and drew from their home’s Japanese-inspired architecture. All of which could become a place for now three-year-old Isla and eventually her six-month-old younger brother Luca to play.

They turned to their friend John Sharp, a spacial conceptualizer and environmental designer, who five years earlier had helped give the couple’s beachside wedding in Turks and Caicos a magical, whimsical feel.

“He has an amazing eye for detail and is able to pair things together you might not expect, but they work,” says Earl. “He asks himself, ‘What is the narrative of each project, and how can I get inside the heads of the people I’m working for and really design their dreams?’”

When Sharp first encountered the back yard, “It looked like a bunch of boulders with a hot tub in the middle,” he recalled. “It was not a fun place for kids to play.” Sharp saw potential in extending the canyon setting to his clients. “There’s a creek there with butterflies and turtles. It feels super Dora The Explorer-like, and those creative backyards instigate curiosity.”

As Sharp began mapping out the backyard, he imagined a combination of California and Japan, and a kind of dual style.

“It’s orchestrated chaos,” he explains. “Some things are meant to grow out, and some manicured. It feels a little bit otherworldly that way.” The yard is also meant to offer color and texture year-round. Japanese maples were introduced for their red leaves. Oversized ferns provide a bit of wintertime greenery. Bonsai trees and elephant ears add a variety of sizes and textures, and a combination of black pine and Mexican bamboo screen the property from the neighbors.

Then, in a corner of the yard, is the tea house, a stand-alone room on stilts. It was initially meant to be an elevated open-air structure for Ilsa but was reconfigured into built-out space. It now functions as an office, and its glass-ensconced façade faintly resembles the iconic mid-century Eames House nearby— making the choice Charles and Ray Eames-designed office furniture an easy call. The open-air space underneath becomes a covered hang-out space with built-in sofas, a vintage travertine table, ceramics by Ben Medanski, and a vintage basket swing.

At the same time, Sharp also helped make the existing cantilevered outdoor redwood decks, which wrap around the house, into true places to congregate. “It was just blasted by the sun and not really a hangout place,” he explains.

After adding overlapping canvas sun screens and a trellis, the west-facing deck with its sectional seating area became a place for the whole family to hang out. The space is just outside Ilsa’s bedroom and the former Japanese soaking tub was moved here to become a kids’ bespoke paddling pool.

On the other side of the house, a secondary outdoor room was created to extend the idea of the Benski-Earl home as a succession of indoor and outdoor spaces.

“Everyone kind of gets their own outdoor zone in the house,” Sharp says. “Thomas likes to have his space to hang out with his friends and grill. The kids can run in and out. Isla can go color underneath the tea house. I think that’s what’s so special about the place. In California, everyone wants to be outside and have experiential outdoor living spaces, to create and gather.”

The family has temporarily been living in London, during the days leading up to the premiere of a new TV series Benski’s company is producing. Yet that’s all the more reason the couple is looking forward to being back in their California oasis.

“It’s beyond my wildest dreams,” Earl says. “We just love spending a lot of time on that deck, and everything flows really easily. I’m excited to go back.”