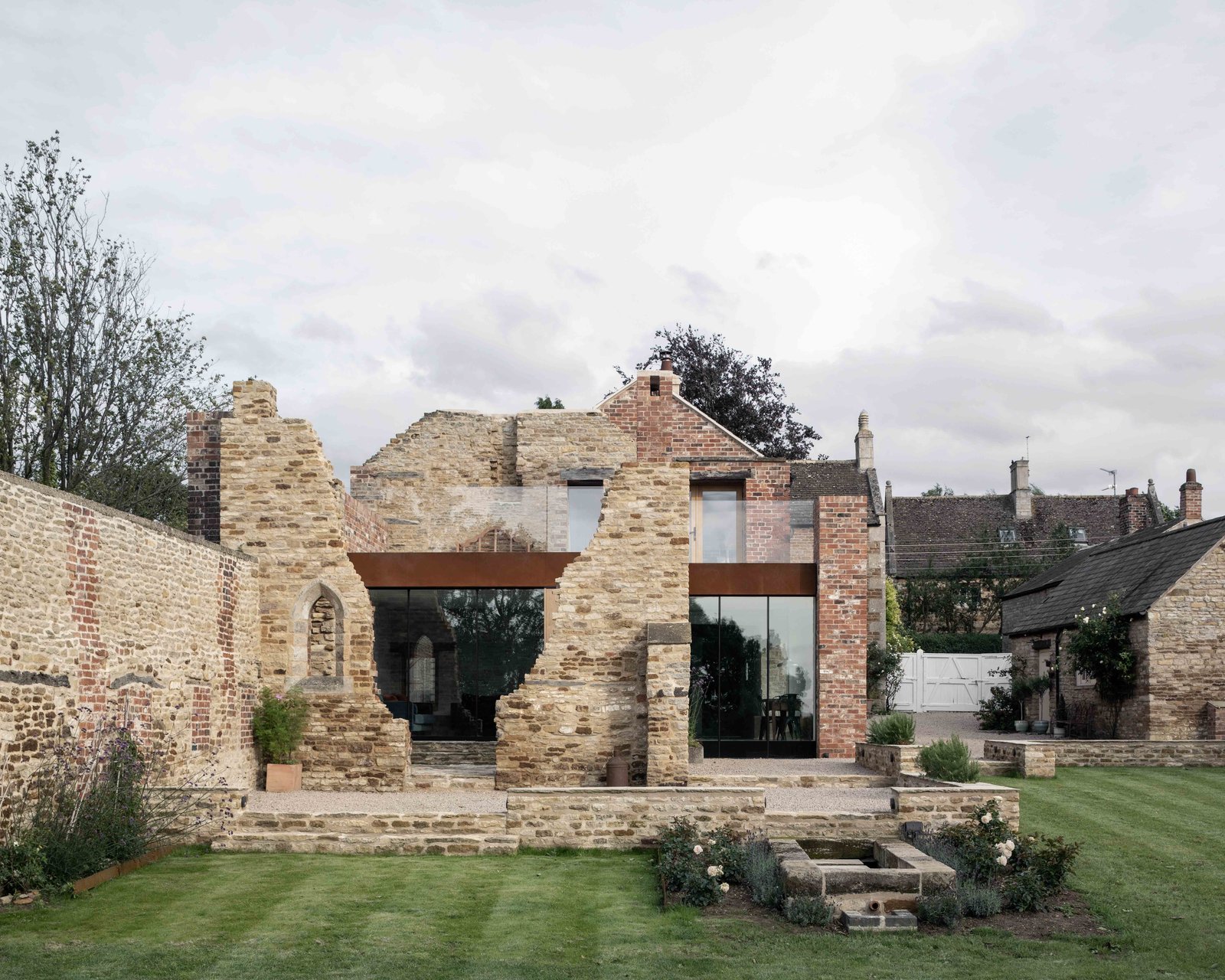 When a couple in Northamptonshire, United Kingdom, tapped Will Gamble Architects to design an extension for their Victorian home, they expected the adjacent stone wall ruin would have to go. But the firm came back with an entirely different idea: instead of demolishing the centuries-old remnants, the architects proposed celebrating the crumbling structure with a reinforcing steel, brick, and glass volume.

“Despite falling into disrepair, the ruin was very important within the community and further afield,” says director Will Gamble. “It once produced parchment paper and was rumored to have made paper for members of the royal family. The ruin was also very much part of the character of the building as a whole, and we felt strongly that it needed to be preserved.”

Nestled between the existing Victorian home and the crumbling masonry section sat an unused cattle shed. To connect all three sections, Gamble proposed a “building within a building” using materials reclaimed from the site. “[The ruin] ended up being the driving force behind the entire scheme, and the change in approach was eventually well received by the client, the planners, and Historic England,” Gamble says.

One half of the ruin footprint is now an enclosed living room and kitchen for the homeowners. Cor-Ten steel beams reinforce the formerly crumbling sections while reclaimed brick and floor-to-ceiling glass fill in the rest. The new volume was limited to one story to allow remaining remnants of the ruin to dominate the overall visual appearance.

Internally, timber joists inside the old cattle shed were left exposed and stone walls were washed in lime to create a mottled effect. Painted steelwork distinguishes the new section while white-washed oak floors help to connect the entire space. Contrasting with it all is a strikingly contemporary kitchen, which plays on the theme of a modern intervention set within a historic context.

“The concept behind the interiors was to go for an honest palette of materials that celebrated the architecture of the cattle shed and the ruin,” explains Gamble. “We tried to preserve the character of the ruin and the cattle shed as much as possible by leaving most of what was already there uncovered.”

Yet another discovery during the restoration was the original parchment factory’s location on top of a natural spring. According to Gamble’s research, hides used to make the parchment were cleaned by lowering them into a series of spring-fed baths located underneath the building. The firm reopened one of these underground baths as part of the project, creating a new water feature and dry well for water runoff.