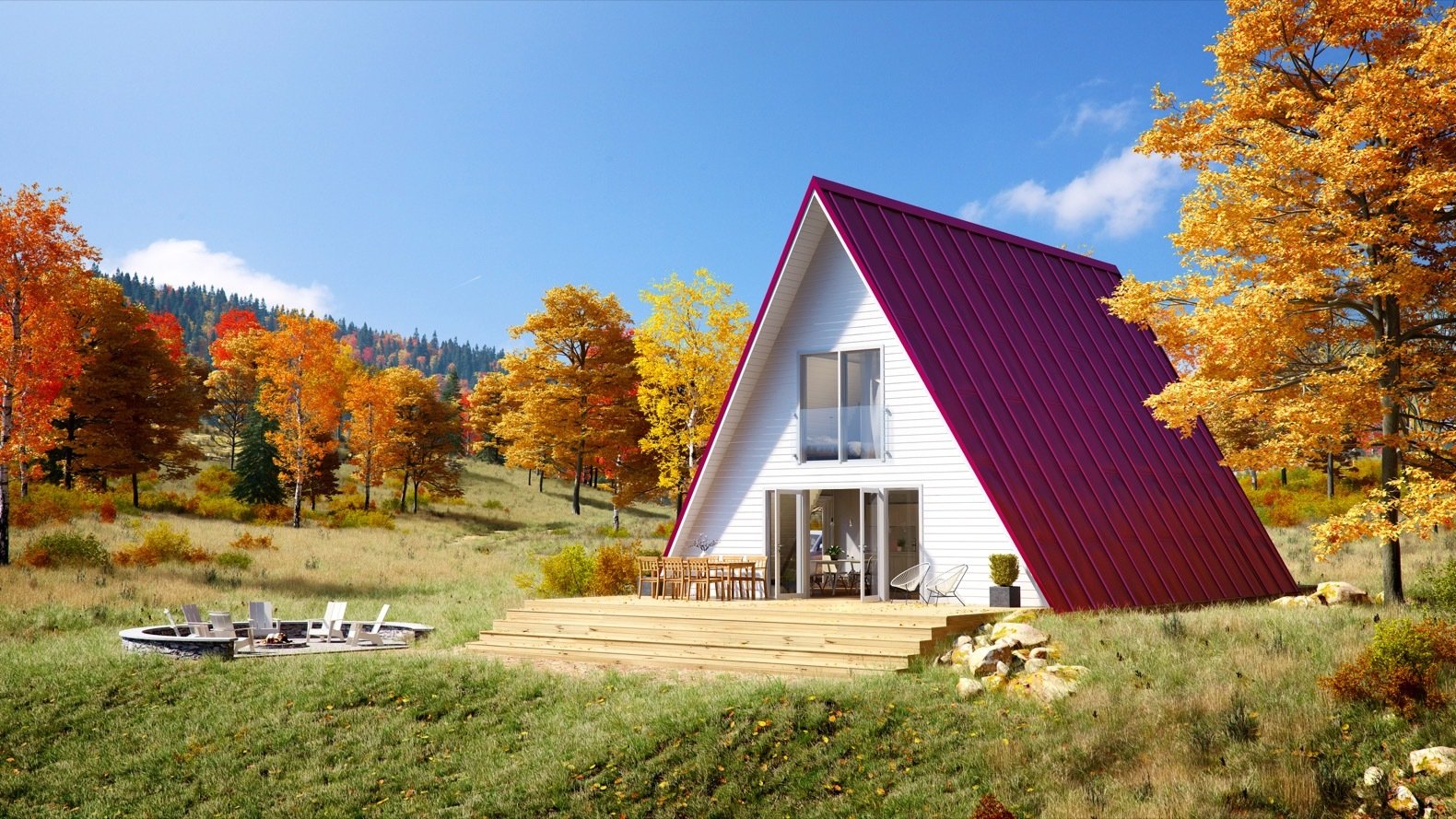 With their rustic appeal and Instagram-worthy looks, A-frame homes have made a major comeback in recent years. And for those who would rather build from scratch than renovate a drafty 1970s model, these next-gen A-frame companies offer flexible, flat-packed kits with precut and predrilled building materials ready for assembly out of the box.

Read on for three kit home companies that are bringing the architectural icon back to life in a variety of ways—from tiny cabins that can be self-built in less than a week to massive A-frames with integrated two-car garages.

After selling his “ordinary” house to build an off-grid A-frame in Estonia, Indrek Kuldkepp was so impressed with the durability and cost-effectiveness of the homes that he launched his A-frame kit home company Avrame in 2016. Avrame has since shipped over 40 homes around the world—from the Azores Islands to South Korea—and, in 2018, the company launched a U.S. branch in response to American demand.

AvrameUSA manufactures and ships kits from Salt Lake City, Utah. Like its Estonia-based counterpart, AvrameUSA prides itself on its flexible options—not only does the firm offer 12 customizable A-frame building kits, ranging from small storage sheds to multiroom homes, but customers also have the choice of purchasing additional shell elements, exterior finishes, and interior finishes for their base structural kits. Each kit is categorized under one of three series (Solo, Duo, and Trio) that differ depending on truss sizes—from the Solo’s 14-foot triangular truss system to the Trio’s 30-foot triangular truss system.

Prices range from $8,250 for the 140-square-foot Solo 57 structural kit to nearly $100,000 for the fully kitted-out 1,600-square-foot Trio 150 with structural, shell, exterior, and interior elements included. The smallest Avrame kit homes can be finished in just two weeks, while the larger Trios typically take around three to four months for completion.

Since the AvrameUSA kits are designed to follow the federal building code and most local codes, customers do not need to hire an architect for plan approval. The base price also includes AvrameUSA structural wet stamps and a complimentary review of local permit checklists. Delivery in the continental U.S. typically takes less than five days, with production estimated at six to eight weeks following permit approval.

Inspired by the cabin his grandfather built in the 1970s, Brand Winnie of Everywhere Co. launched Ayfraym, a building kit for a three-bedroom, two-bath A-frame in June 2018. The building process begins with the purchase of Ayfraym plans for $295, after which customers are free to build independently or purchase the full kit, which includes Ayfraym engineering support for $1,495 and all materials—including framing, exterior/interior finishes, Summit Appliances, light fixtures, and more—for an additional $169,000. Delivery is currently estimated at two to three months.

Given the Ayfraym’s large, 1,943-square-foot size, the company requires that customers hire a licensed general contractor for construction, which is estimated to take between three to four months. The firm is also planning to launch two new A-frame models this summer: the 825-square-foot Ayfraym Tiny (with material costs of $129,000) and the 2,436-square-foot Ayfraym Plus (with material costs of $199,000). Preorders of the plans for these models are currently priced at $295.

The first A-frame projects built using Ayfraym plans—with locally sourced materials and labor—are expected to be completed in the upcoming months. The Everywhere Co. also has plans to build Ayfraym show models at Everywhere Ranch, a 1,100-acre community the company is co-developing in Indianola, Utah.

Founded in 2015 by Wilson Edgar and Michael Leckie, Vancouver Island–based Backcountry Hut Company (BHC) is a contemporary cabin kit purveyor—that recently added a minimalist A-frame, dubbed System00, to its lineup. Priced at 29,500 CAD (around $21,435 USD), System00 is the smallest of BHC’s cabin options at just 107 square feet and is designed for self-assembly. The firm estimates that a team of four to five people can complete the build in less than a week.

Since System00 was just launched earlier this year, BHC reports limited capacity to take on additional orders for this summer and is considering bringing a prototype to trade shows next year. BHC ships to the U.S. and Canada with a current estimated delivery and production time of two to three months.