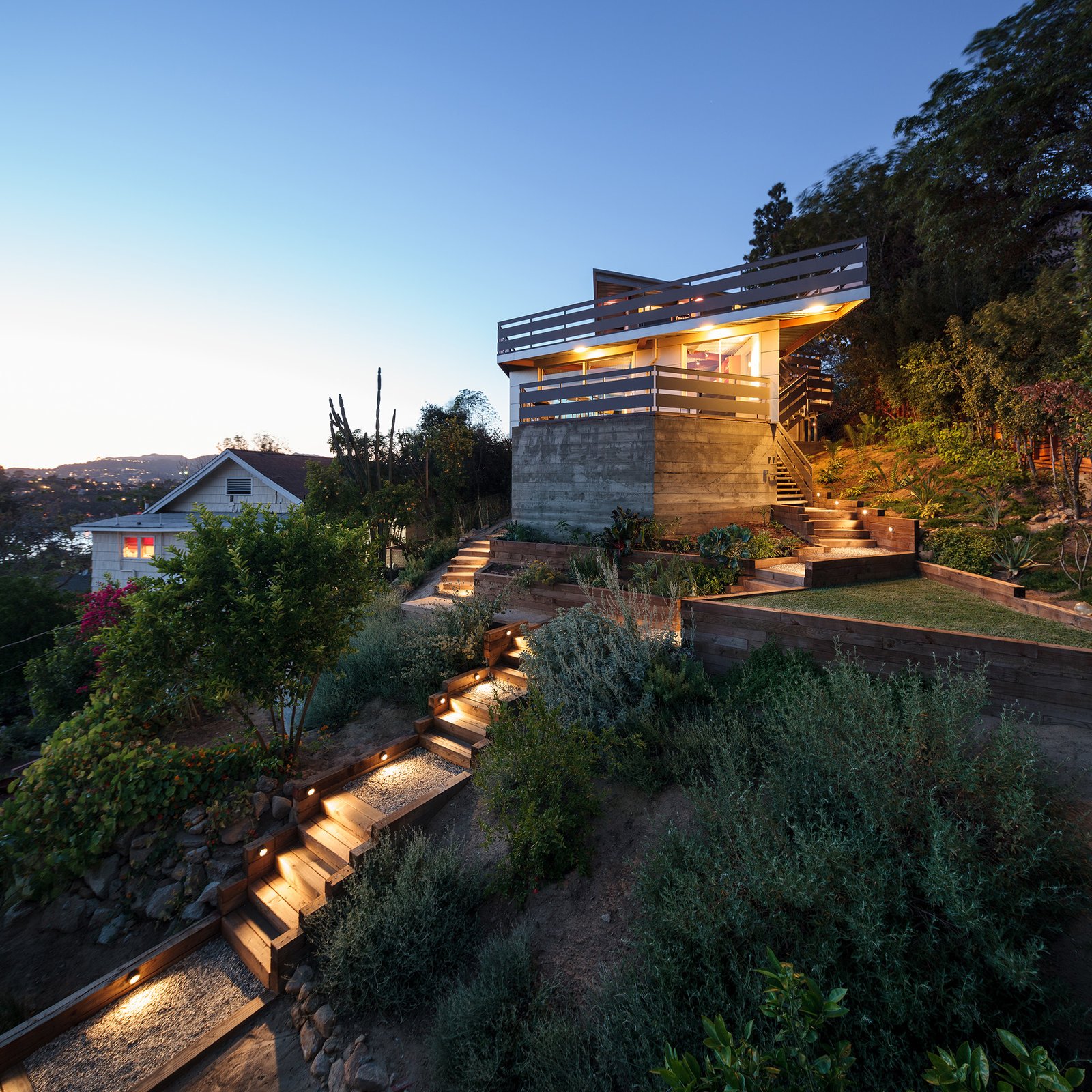 Up above the eastern edge of Silver Lake Reservoir, a hexagonal two-family dwelling balances atop a series of staircase landings, stretching out over the hillside on cantilevered balconies. Designed by Los Angeles architect Tom Marble in a creative fermentation with owner and friend Tim Tattu,  the Tattuplex poses at a 12-degree angle to the lot, with two polygonal volumes forming a stack, punctuated by a triangular wraparound terrace.

A visual artist turned hospice nurse, Tattu had left Los Angeles years earlier to devote himself to the study of Buddhism at the Sogenji monastery in Okayama, Japan. He spent five of those years living a rigorous monastic life as a disciple of Shota Hirata Roshi before the master asked him to help found an end-of-life hospice center in Washington on an island north of Seattle.

By the time he returned to Los Angeles in 2009, the recession was in full swing, and he managed to purchase a prominent hillside lot vacant since the 1980s for $190,000—almost half its previous value. Early on, he had committed to buying structural materials from EcoSteel, which manufactures prefabricated panels that allow for quick and efficient construction. Except the only previous applications had been orthogonal warehouses.

“I did not want a box,” Tattu says. “I wanted to look at the view from many angles. I’m not a huge fan of houses where you go straight out and look at the view straight on—that makes the view too overwhelming. I like a big view, don’t get me wrong, but I like to have different angles on the view, because it kind of shifts your perception.”

Over dinners, Tattu, Marble, and the artist Pae White—Marble’s wife and a friend of Tattu’s from art school—discussed the concept and iterated the design. With Silver Lake’s rich history of midcentury modern houses, they wanted the home to equally reflect the influences of raw steel in the work of Richard Neutra, Rudolph Schindler, and John Lautner, whose Silvertop residence is visible on the opposite hill above reservoir. “In that neighborhood there are a few architects who worked earlier in the 20th century,” Marble says. “I felt like it was an opportunity to do a ‘Silver Lake’ type of building in Silver Lake.”

The combined living room, kitchen, and dining room has a polished concrete floor, an exposed metal pan ceiling, and double-glazed sliding windows that open onto two extensive balconies. The kitchen cabinets are custom vertical-grain Douglas fir, and the peninsula is topped in honey-colored travertine that extrudes the hexagonal structural grid. The views face westward and grab the best light from Southern California’s sublime sunsets. “I like the shapes, because I felt that they held a certain energy that radiates from the building in relationship to the geometry,” Tattu says.

An office built into the side of the bedroom uses the same Douglas fir wood and forms the center of the second hexagon. Another glass sliding door from the bedroom passes through to the living room balcony. A dedicated master bathroom forms another spur of the wheel, with a soaking tub, a custom vanity topped in travertine, and a shower sealed with antique burnt red tiles. Another sliding door passes to a gravel-covered garden. A walk-in closet with a window and space for meditation, and the entryway complete the hexagon.

The second-floor unit was originally conceived as a meditation room and yoga studio where Shota Hirata Roshi would stay during his visits to Los Angeles. As the project progressed, it was built out as a rental studio to offset the mortgage costs.

For Tattu, who is now immersed in the COVID-19 public health crisis as a hospice nurse and confronted with shortages in protective equipment, it’s particularly important to have a quiet place to retreat.  “I always wanted home to be a refuge and a place for healing and renewal, and to have a place that energetically supports everyone who enters the spaces.”