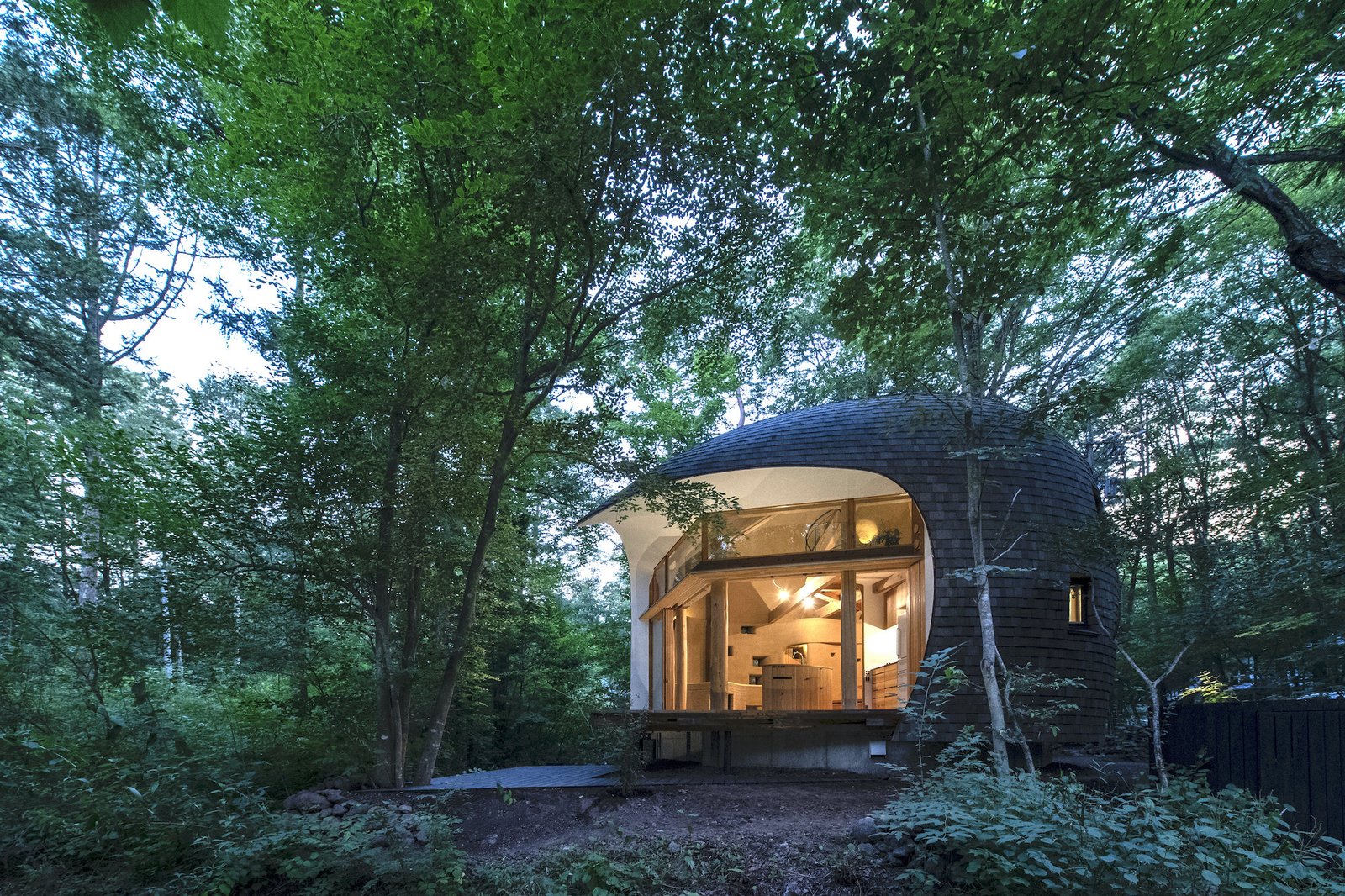 Deep in a forest in Nagano, Japan, a tiny rounded cabin appears to grow from the ground. Its rammed earth walls are clad in a “skin” of timber shingles that resonate with the surrounding trees. Known as Shell House, the cabin is the work of Japanese architect Tono Mirai, who is best known as a pioneer of “earth architecture.”

Mirai designed the small rural retreat for a Japanese couple from Tokyo—a Shinto priest and a kindergarten director—and he took inspiration from what he describes as “the force of the place” to arrive at the organic form and sweeping internal space.

The 625-square-foot cabin is located in the forested mountains of Karuizawa, Nagano—one of Japan’s most famous summer resort towns. A small waterway runs past the site, and the cabin boasts views over Mount Asama, the most active volcano on the island of Honshū. “It is a beautiful site surrounded by forest,” says Mirai. “For me, the place evokes the life force of nature.”

It is this notion of “life force” that Mirai wanted to explore in the architecture of the small villa. The organic shape of the building is inspired by the natural forms found in the surrounding landscape, and the material palette is also taken from nature.

“I felt that a straight and modern form would not be matched to the surrounding forest. Instead, it is an architecture that is inspired by the way humans are born from and return to the earth,” says Mirai. “The seven beams that emerge from the organic earth wall and form the roof are an expression of the cycle of life of humans and the universe.”

The walls are made from rammed earth, and the interior has a natural earth plaster finish. The exterior is clad in a “shell” made from asphalt shingles. “Although traditional Japanese architecture often emphasizes timber pillars and beams, I like to insist on the importance of using earth walls,” says Mirai. “Like human skin, earth walls control air humidity and store heat from the sun. And, they can make a soft, smooth, and tender space as opposed to the linearity of wood as a material.”

The timber and earth was all sourced from within 93 miles, and Mirai was adamant that no laminated wood or plywood be used. Instead, he used local timbers, including Japanese red pine, cypress, and cedar. “I wanted to challenge myself to use only natural materials local to the site,” he says. “The yellow-brown color of the earth is a local symbol.”

The interior is open and flexible throughout, with softly formed earth walls that embrace the timber elements. The ground floor features a living and kitchen space that opens to a timber deck. A small raised platform at the rear of the space can be used for living, dining, and sleeping, with storage beneath the platform for a Japanese futon bed. Sliding timber doors at the rear of this platform conceal a bathroom and storage space. “The stepped floor is used to represent a variety of different functions in the one space without the need for walls,” says Mirai.

The second floor, which is defined by the curved beams of the roof, is also used as a multipurpose living and sleeping space, and it has integrated storage for bedding. Natural light enters this space through small apertures in the curved earth roof.

Like a traditional Japanese timber home, the interior and exterior spaces are connected by a timber deck with long eaves. Glazed pocket doors open the ground floor entirely to the deck and views of the forest, inviting the landscape into the living space.

The home not only has a sustainable natural material palette, but also responds to the changing weather conditions—the region sees humid summers and cold winters, with temperatures falling to 5°F. The long eaves protect the interior from the harsh summer sun, and the rammed earth walls enable passive heating in winter. The large glazed areas on the south and east sides of the home allow the sun to penetrate deep into the interior, even in winter.

“I feel this project expresses the power of nature and humanity,” says Mirai. “I was inspired by the spirits, the place, the wood and earth materials of the forest, and the craftsmanship of the Japanese artisan. I respect all of them.”