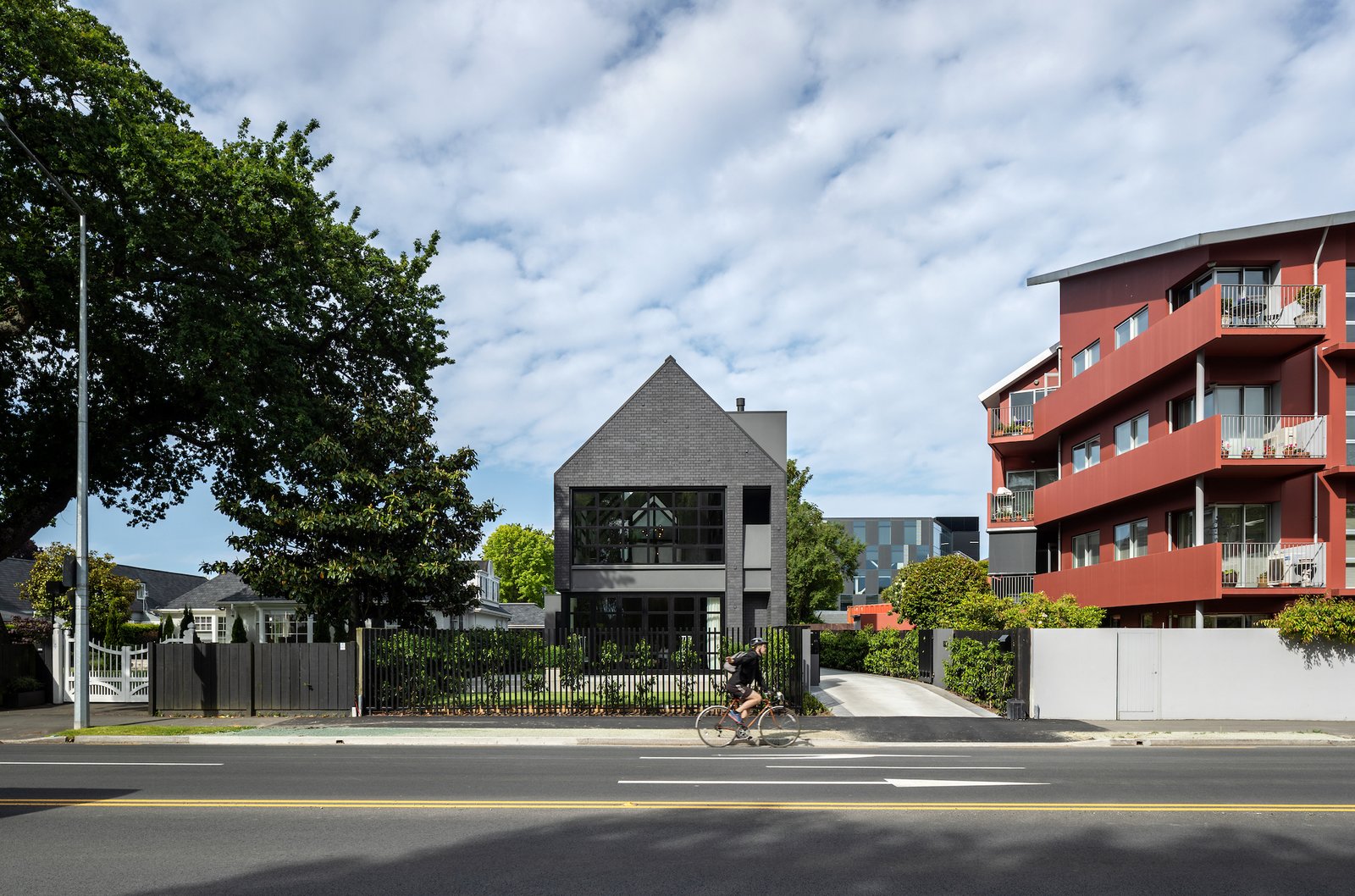 In 2010 and 2011, Christchurch, New Zealand, experienced two catastrophic earthquakes that destroyed much of the city’s heritage architecture. “The city underwent a loss of its architectural canon,” says architect Phil Redmond, director of PRau. “It was devastating, and there are many types of projects that just don’t exist here any more.”

So, when tasked with building a home on an urban site adjacent to Hagley Park—the city’s largest urban open space—Redmond decided to engage with that loss by investigating and adapting one of the lost archetypes. “We began with the idea of a simple, industrial warehouse archetype,” he says. “And, we asked how we could adapt that idea into a residential project.”

Starting with a heavy, industrial gable form, PRau developed a two-story, three-bedroom townhouse for a mother and daughter. “We believe in contextually appropriate projects, whether that’s physically or theoretically contextual,” says Redmond. “This home is supposed to look like an adapted building, and the two binary opposites of the design exist together, creating a project that is contradictory in nature. It has that dichotomy of both things—industrial and residential—existing within one form, and you can’t separate them.”

Located on the northeastern edge of Hagley Park, bordering the western fringe of the city, the new home occupies the front half of a long, narrow site. The home sits on a busy ring road that runs around the park, so it has been designed to block out the road and neighboring buildings and embrace select elements of its surroundings.

“The idea was to block out what you don’t want to see, and engage with the things you do,” says Redmond. “Windows in the home frame the park, and we have borrowed the landscape of the northern neighbor as they have a really beautiful established garden.”

It’s this approach that informed the dramatically contrasting facades of the home—the northern and western facades open up to the landscape, while the southern and eastern facades were intentionally left blank.

The driveway entrance to the home is located on the blank southern facade, and it leads directly into the ground-floor sunroom. Two bedrooms with en suites and a laundry room are located behind a paneled wall off a hallway that connects the entrance to the garage.

To the right of the entrance is a staircase that runs along a spine wall created by the brick facade wrapping into the home. The stairwell is clad in hot-rolled steel plate that evokes the industrial inspiration and conceals several “secret” rooms, including storage and a downstairs bathroom.

The first floor features a large, open-plan living, dining, and kitchen space at the western end, overlooking the park. The master suite at the western end of the home is separated from the living spaces by a sheltered courtyard carved out of the gable form. A steel-framed glass wall, which incorporates a bespoke joinery unit and fireplace, separates the stair from the living space, and references the industrial language of the warehouse archetype that informed the design.

The material and color palette is intentionally simple. It contrasts softer materials that are perceived to be residential—veneered joinery and plasterboard—with heavier, industrial elements such as hot-rolled steel and brick.

“The client loved the idea of the home being quite dark from the outside, and I have always had a fascination with brick,” says Redmond. “In post-earthquake Christchurch, many people were apprehensive about building using heavy elements, so no one was really using brick.”

Drawing inspiration from the industrial buildings found elsewhere in New Zealand, Redmond used a Flemish bond for the facade construction, with a pattern of protruding bricks that was developed from a series of plaster study models early on. “The facade is muted black, which is a color of loss,” says Redmond. “It ties into that ethos of investigation into the loss of an archetype.”

The brick protrusions cast a pattern of shadows across the facade, which echoes the dappled light created by the tree in the neighbor’s yard. “It’s a beautiful moment,” says Redmond. “One element is a built form, and the other a living form—I’m fascinated by how light can be treated by architecture.”

Another key element of the project is the home’s transformation from day to night. “The exterior of the home is very solid and private,” says Redmond. “It creates a level of intrigue during the day and has a real presence to it. As soon as it switches to night, however, the exterior skin of the building disappears and you read the sculptural cutouts of the windows and skylights. It’s an inversion of how the house feels during the day, like it’s coming out to party at night.”

As strict local planning laws required a certain density of housing on the site, a future dwelling is proposed for the rear of the site. “The owner has taken the front section of the site, which has the closest engagement with the park,” says Redmond. “We have done several schemes for the dwelling at the rear—the one we’re most excited about is a little three-story tower that would engage with the park by looking over the shoulder of the existing home, like a Parisian roofscape.”

“There are a lot of moments in this project that I really love,” says Redmond. “I love how it changes from day to night, and the contrast between the blank walls in the private spaces and the outdoor spaces on the park side to the north. You really get a sense that the building could have been adapted over time, and it’s a great space to be.”