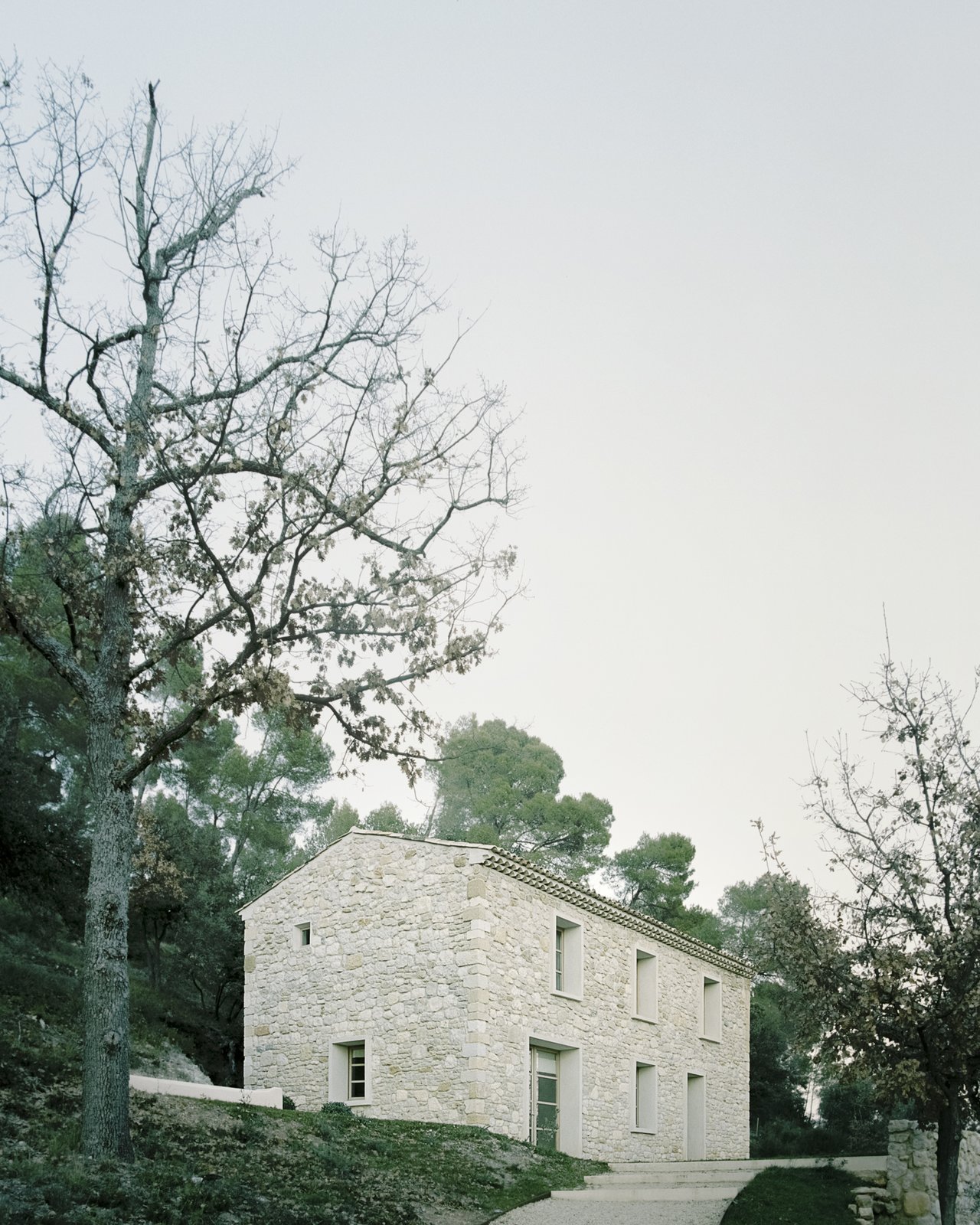 The region of Vaucluse—known for its small villages, lavender fields, truffles, and wine—is the pinnacle of southern French charm. And here, on a meadow at the base of a small, tree-covered hill, is where architect Timothee Mercier of Studio XM’s family has summered since the early 2000s.

“At the time, a small farmhouse sitting in the forest nearby had been weathering away for more than a decade,” he remembers. “It stood on its hill, fading comfortably into the landscape…it was still soft in its ruinous state, a reminder of the qualities of its surroundings.”

When his parents approached him to create a new home out of the faded structure, Timothee gladly accepted: “It was very special for me to be working somewhere I had spent most of my summers as a child. I knew the grounds well, and I visited the construction site many times.”

When his parents approached him to create a new home out of the faded structure, Timothee gladly accepted: “It was very special for me to be working somewhere I had spent most of my summers as a child. I knew the grounds well, and I visited the construction site many times.”

His mother, Eve Mercier, who founded Insight School of Interior Design in Hong Kong, was a strong collaborator on this project. Her tasteful eye was “instrumental in many conversations about materials, texture, furniture, and colors in the house,” says Timothee. The pair communicated very closely throughout the entire construction process, and their aesthetics mix to create an alluringly austere—yet intimate—interior.

But, adds Timothee, “My father’s personality is [also] visible in the process.” Edouard Mercier, who now heads an investment firm based in Hong Kong, “is the perfect partner to have when discussing planning, execution, and communication. And by ‘perfect’ I mean ‘horrible’—he will not let anything go without a good reason. Without him, the project would have suffered from many inefficiencies.”

Together, the family strove to create a stripped-down retreat that would feel both monumental and quiet, and be flexible to suit changing needs.  “The project tried to stay clear of fuss and clutter,” says Timothee. “I decided early on to infuse the house with the monastic qualities of its surroundings. It had to be a spectacle, but a discreet one.”

MA House, or House of Bees, as the project is called, keeps much of the original farmhouse’s footprint. The existing structure was slowly demolished in many phases, which allowed Timothee to indulge his intensely thorough consideration: “We revised the extrusions around the windows a handful of times. I even had a full one done on the southern fafade before tearing it down. Proportions are important.”

The astute design respects the site and architectural history of the region, yet brings a meditative minimalism to the interior through a monochrome color palette and open floor plan.

Most walls are finished with chaux, a local lime plaster that lends a rough, textured surface, a delight next to casework carved from regionally sourced oak.Local companies and craftspeople played a large role in the construction of the guesthouse. Each stone for the exterior walls was cut by hand, giving all four sides of the house a distinct texture. The roof tiles also nod to regionality: they are tuiles anciennes, some more than 30 years old, ranging in color from green to red.

“Now that it is finished, I stay there often when I visit family. For that I am truly lucky,” says Timothee. “Not a lot of architects can live in the spaces they design for others—and there is so much to learn from it.”