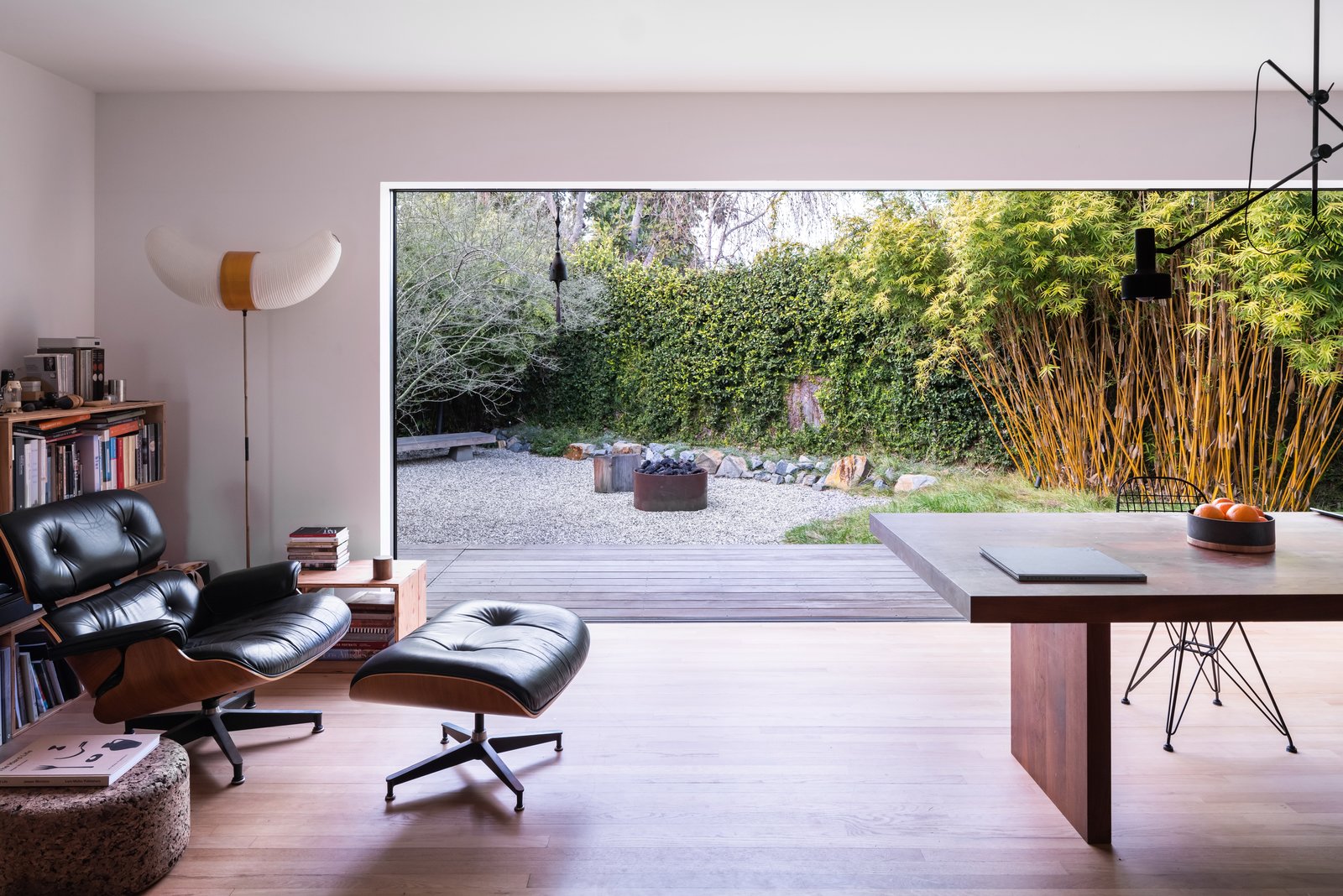 The journey to settle into and raise their family in just the right house has been a long one for Takashi Yanai and Patti Rhee, partners at Los Angeles-and San Francisco-based Ehrlich Yanai Rhee Chaney (EYRC) Architects. They began their search over a decade ago, hoping to find somewhere both comfortable and conveniently located near their Culver City studio.

The couple felt particularly drawn to nearby Mar Vista, a neighborhood that reminded Rhee of her native East Coast, “with lots of trees and bigger yards.” There they bought a comfortable post-World War II bungalow in a Westside subdivision. “We are not on a street with a lot of houses facing each other. We are sandwiched in at the end of the block and I love the privacy,” Rhee continues.

After 10 years of living there, however, the architects could no longer ignore the fact that something felt aesthetically amiss. Friends who visited, for example, were often confused when they saw how the 1,500-square-foot dwelling’s personality clearly didn’t mesh with the owners’.

For Yanai, who presides over EYRC’s residential studio, “it got to the point that it was not a reflection of what’s important to me in my designs. It was so incongruent to our sensibilities.” A contemplative renovation, one that demanded a modest budget, became essential.

Guiding the narrative of the remodel are two fundamentals that mattered most to the owners: a seemingly effortless blurring of the indoors and outdoors and “to keep things simple, which is not to say minimal,” Yanai clarifies, noting how the home was meant to serve as a frame for the landscape, the art, and the furniture.

Working from the outside in, Yanai and Rhee began the revamp process by collaborating with David Godshall of Terremoto, a landscape architectural design studio with offices in L.A. and San Francisco, on the garden. Conceived as a distinctly Californian retreat that is Japanese in spirit, it incorporates such plants as bamboo and feather grass.

To amplify this deluge of greenery, the architects created a neutral backdrop for it by painting the exterior of the house black. French doors were also eradicated to make way for a commanding 18-foot-wide sliding glass door. When opened, the sliding glass door allows the living area to blend into an extended deck crafted from marine-grade plywood that also calls to mind the porch-like engawa that is common to Japanese architecture. “I’m an indoors person,” says Rhee, “but I very much appreciate that we can look out on our own beautiful, graveled meditation garden.”

By accentuating the bones of the building and reorganizing and editing the layout with “interventions that were impactful and careful,” explains Yanai, a similar graceful vibe now pervades the open-plan living and dining area. Base trim and crown molding were removed, for instance, as were a number of downlights “to make the surface as plain as possible.”

A partition wall, newly re-clad in plywood and serving as a showcase for photography on one side, divides the living room and streamlined Bulthaup galley kitchen where Rhee likes to work from the midcentury Danish wood desk.

Storage is minimal at the Yanai-Rhee residence, and that lack dovetails nicely with the couple’s pared back ethos. “If you have things that you love or need to keep, why hide them,” says Yanai. “Our living room is defined by open shelves with books, objects, and games that are a display of what’s important to us as a family.”

What’s also special to them is artwork from the likes of Hiroshi Sugimoto, Daido Moriyama, and Johannes Girardoni. “We don’t just collect art for the sake of collecting,” adds Yanai. “Most of it has personal significance, whether we know the artist or it was given to us by a client.”

The bulk of the construction took place over six months, and Yanai and Rhee’s kids, now ages 14 and 11, treated the disruption like a camping adventure, what with a temporary kitchen stationed in the garage and everything, including the television, crammed into just one bedroom for a stretch of time.

“We wanted them to live through a project,” says Yanai, and they continue to do so. Yanai and Rhee are organically making tweaks along the way, and there is still the master bedroom and bathrooms—and maybe even a Japanese-style hot tub—to tackle.