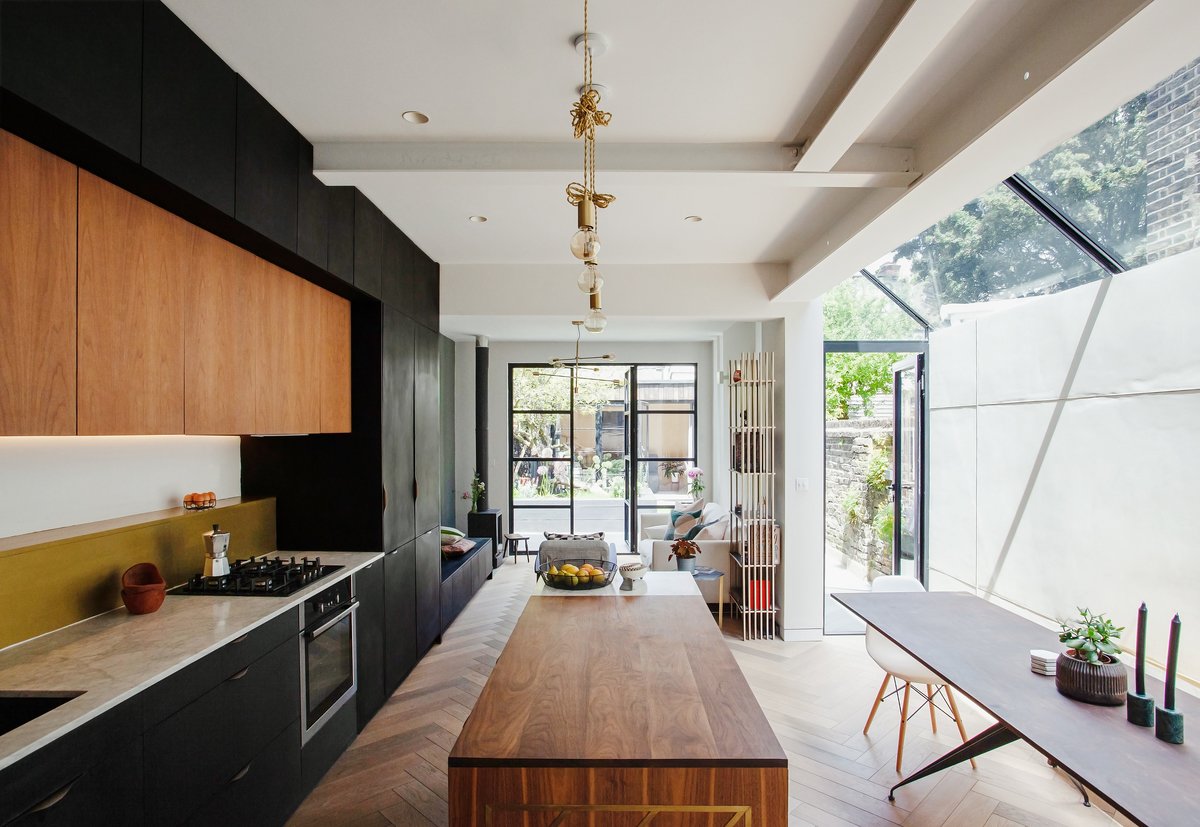 When the clients first bought the home, it hadn’t been touched for about 50 years. “It had carpeting, wallpaper, and was ‘granny chic’ without the chic,” Dumas says. “It was quite the odd house.”

The rooms were small and quite dark, and the house narrowed at the back. The rear of the lot had a modest, neglected garden with a horribly unattractive fence and structure a neighbor had built. “We wanted to keep the charm and historical features of the house while opening it up,” he says.

The home is located below a neighbor on the lower level, so Trellik Design Studio started by reconfiguring the cramped and dark front lobby. The more generous, revised entryway is filled with natural light and has views straight through to the garden. The design team also opened up the kitchen and dining room and created a small extension on the side of the home.

“The idea was to extend on the side to claim that extra meter, allowing the dining table and kitchen to all be together,” Dumas says. Along the side of the home, the design team created a black-and-white tiled courtyard, which provides more outdoor space.

In the design phase, Dumas and the clients visited London’s Barbican Centre to see an exhibit on Japanese architecture from 1945 to today. The use of charred timber quickly caught their attention.

“Charring timber makes it more weatherproof and better able to withstand sun and rain,” he says. After conducting research, Dumas found a source for Siberian timber, which he liked for its grain and coloration—it felt like a natural fit with the updates he had already made.

In the garden, Dumas built a shed to hide the ugly back wall and the building a neighbor had constructed. The clients now use the accessory unit when working from home, and for guests.

“It’s also made the house feel bigger than it is, because when you look through the kitchen you see the shed, and it looks to be all one,” he comments.

The home’s interior shows clear Scandinavian design influences. Dumas added a wall of cabinetry to provide extra storage and serve as a buffer against noise, which is one of the biggest complaints in high-density neighborhoods like this one.

He went with Valchromat joinery—a medium-density fiberboard that is economical and has “a cool identity and texture that complements the charred timber.”

The design team sanded and varnished the original timbers in the front of the home, and they went with light engineered hardwoods laid in a herringbone pattern for the rear.

The clients are big entertainers, so they designed a movable walnut island for the kitchen. To further save money, they painted the back wall in gold to mimic the look of brass.