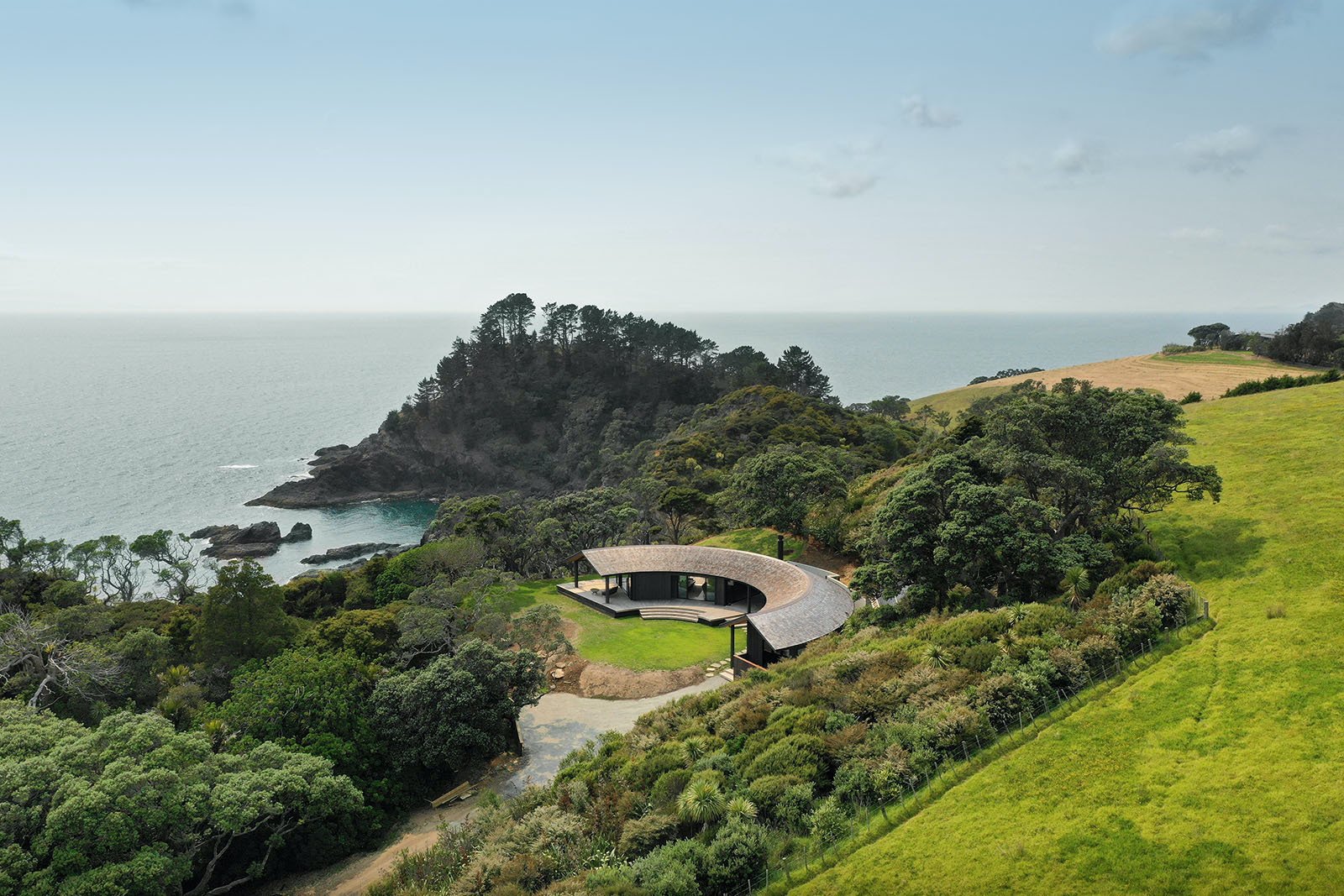 On a spectacular site near Matapouri in Northland—a subtropical region on the tip of New Zealand’s North Island—architect Belinda George has crafted a retreat for a father and his three daughters. The small bach—a type of holiday home in New Zealand—is a perfect arc that reimagines how interior space relates to the outdoors.

“The client, Tom, has a particular attachment to the land because this is where he grew up,” says George. “He and his five siblings roamed the farmland where this site is for many years, and the land was eventually carved up into sections for the siblings. The rest of the land was returned to native bush, and the family has completed a huge regenerative planting program.”

The site is on a cliff edge looking out to the ocean—but also into a beautiful stand of native bush. Tom was insistent that both the bush and the sea view be acknowledged in the design, which led to the distinctive circular form.

“The curve actually turns its back on the sea and focuses the attention on anchoring the house into the hillside as a counterbalance to the precarious position of inhabiting a clifftop,” says George. “The challenge was to make the house dramatic and memorable, yet sympathetic to the surrounding farmland—particularly from the sea.”

The home is crafted primarily from cedar, with Alaskan yellow cedar shingles on the roof and sustainably sourced western cedar exterior weatherboards that have been stained dark. As a result, it almost fades into the surrounding bushland.

“Tom tells stories of sliding down the hill into the bush as a child, and I immediately felt that the design could respond to this feeling of being wrapped in a nikau palm husk and making the most of the slippery slope,” says George.

The bach is divided into separate parts joined by a shingle roof that drapes over the entire home. There is a living wing, with a kitchen, dining, and living room, and a sleeping wing, with three bedrooms, bathrooms, and a utility room. These are connected by a covered courtyard that George describes as an “in-between space.”

There is no formal front door—instead, guests are greeted in the courtyard or enter directly into the living space—and the circulation space takes the form of a covered deck.

“The separation of the living and sleeping wings provokes the feeling of movement and funnels you through to the bush,” says George. “It also promotes a relaxed feeling of camping holidays and was driven by the client’s desire to make the home a relaxed place.”

While the home is relatively small at 162 square meters, it is surrounded by 235 square meters of deck, making outdoor living a key part of the concept. “There is more deck than house in this project—as it’s located in a very sunny part of New Zealand, much time is spent outdoors,” says George. “I was very fortunate to have a client who was happy to experiment with this slightly unusual layout.”

Like the exterior, the interior is almost entirely constructed from timber. The interior walls are tongue-and-groove cedar planking with an oil finish, and the ceilings are Meranti plywood with cedar battens which conceal the joints and heighten the impression of geometric precision in the home. “When it was under construction, the rafters were put in place attached to a curving steel ridge beam,” says George. “It felt like you were inside the belly of a whale. I was quite sad when they were covered up.”

Key pieces of furniture were designed specifically for the home, creating a holistic vision that brings house, interior, and furnishings together seamlessly. George designed several pieces herself, including the dining table, the bedroom furniture, and the joinery in the kitchen and bathrooms.

“Building a curved house means that everything needs to be curved, including the spouting—and this added a lot of expense,” reveals George. “It is such a strong design feature, though, and a conventional rectilinear shape would not have had a similar impact. The builders took a great deal of pride in their work and had a desire to make this a memorable project—it was such a pleasure to work together toward a common goal.”