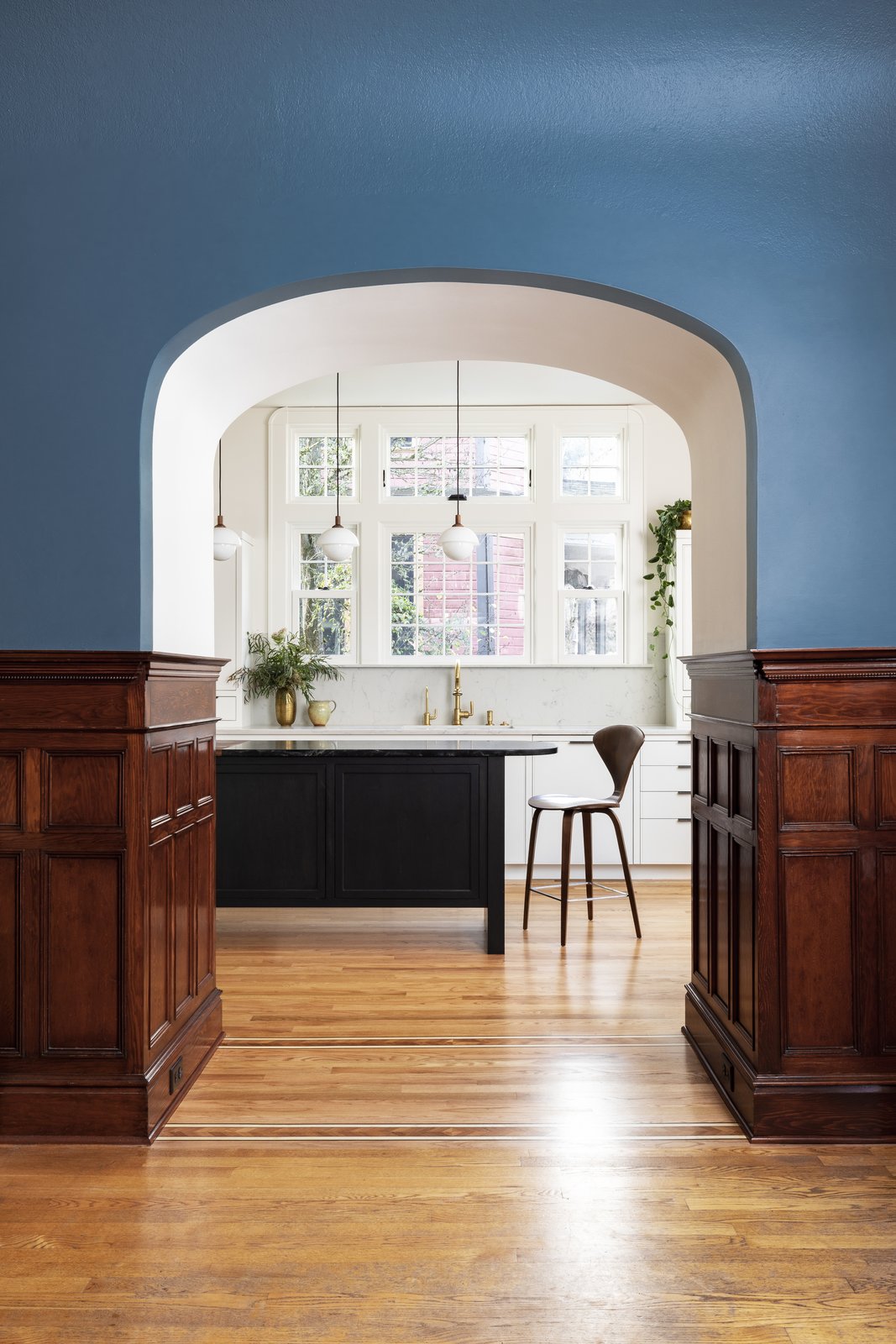 Designed by well-known Oregon architect William Christmas Knighton and completed in 1902, this house was built in anticipation of the Lewis and Clark Centennial Exposition. “The way that it’s oriented on the lot, the front of the house doesn’t actually face the street. It faces what was the view down into the valley below, which is where the fair was in 1905,” says interior designer Stephanie Dyer of Dyer Studio.

Last year, Dyer was brought in to overhaul not the front of the house but the back. The owners are a couple with three children, and they needed a more functional kitchen that matched the scale and style of the original home, as well as a mudroom that could actually store stuff.

Dyer was immediately taken with the house’s historic character. “There are just beautiful volumes and details throughout the whole home, such as trim details that I’ve never seen anywhere before. It’s just a very special home,” says Dyer. Her studio proposed a new kitchen and mudroom plan that primarily utilizes the existing footprint, only much more effectively.

“I come from a historic preservation background and ethos,” says Dyer, noting that a prior architect that the homeowners consulted suggested blowing out one side with an addition to get the space needed for a more functional kitchen. “It’s really important to me to not just come in with a sledge hammer and knock down everything,” says Dyer.

Dyer’s remodel plan excised space from the existing home wherever possible. For example, the team removed the kitchen’s dropped ceilings to reveal ten-foot-high ceilings that sync with the rest of the home. When a wall oven was pulled out, Dyer and team discovered unused space behind it. Additionally, an old chimney within the wall was removed.

“It was a nice way to access a lot of space without doing a major addition,” says Dyer, who felt that an addition would “not be as sensitive to the period of the home. I wanted to see what we could do to make the space feel bigger within essentially the same footprint.”

To start, the clients requested a white kitchen that contrasted with the colors found in the rest of the house. “I really liked the idea of this bright white space in the kitchen that you would see through the very saturated color of the dining room,” says Dyer. To that end, the perimeter is lined with white cabinetry, stone counters, and simple white tile.

Dyer then introduced color and contrast with a bright blue stove and a bespoke island stained black. In order to reference the home’s original details, the team wove in a subtle, repeated motif of curves and scallops, from the scalloped edge on shelving and the counter, to the coved ceilings that match the dining room, to the rounded niche of the stove. “There were all these curves,” says Dyer. “I wanted to bring that language into the kitchen.”