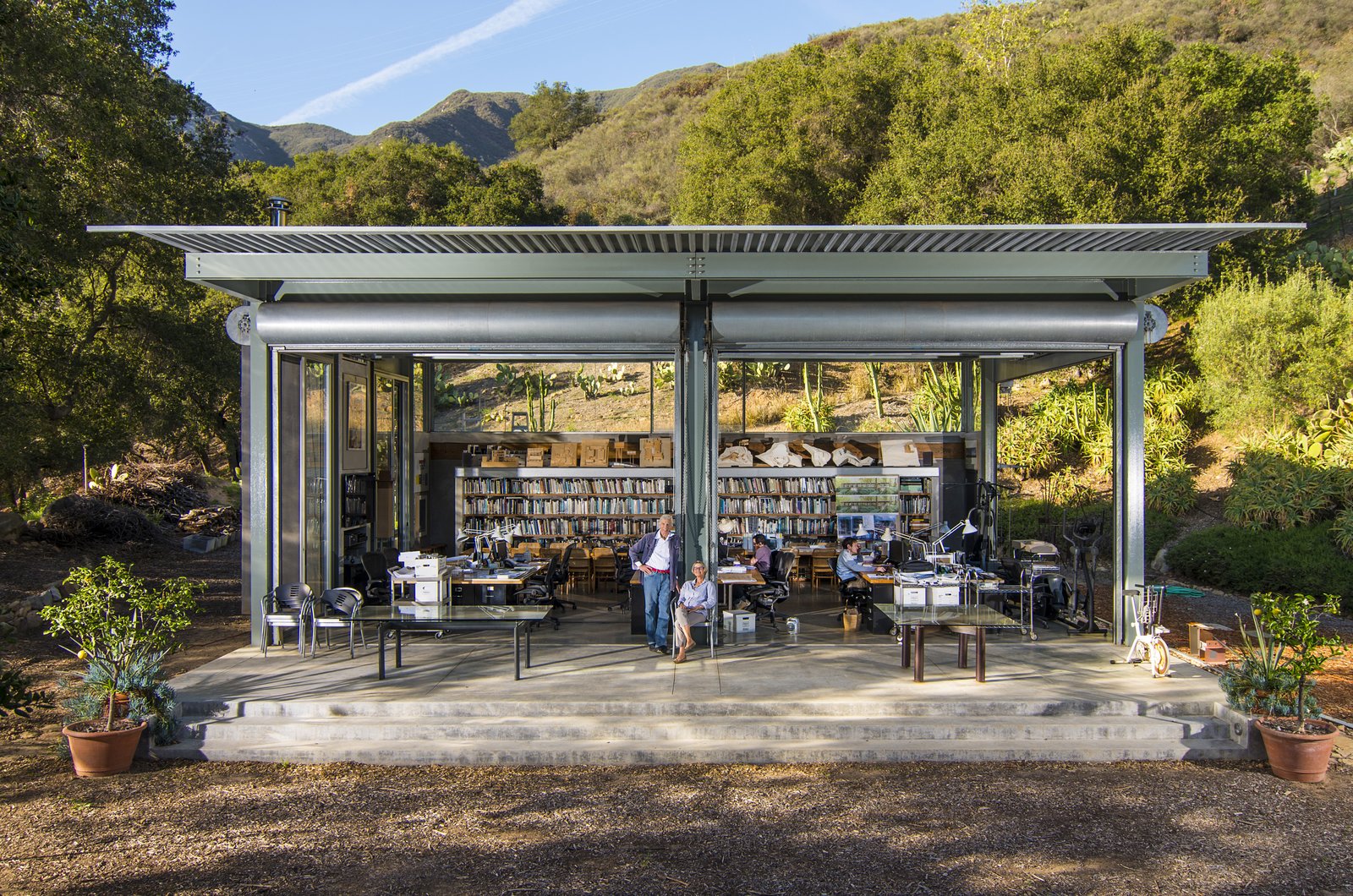 The nearly 39-acre site in Montecito, California, that architect Barton Myers chose for a family home afforded breathtaking views of the ocean, the Channel Islands to the south, and the mountains to the north—but it did raise a red flag for him and his late wife, Victoria. “Fire was very much on our minds,” shares Barton. “As an architect, if you are going to go into a dangerous area, you have the responsibility of dealing with that in a sophisticated way and hopefully establishing a prototype of how people should deal with these areas.”

Accordingly, Barton focused on making sure the residence would be able to withstand wildfires. The complex—which comprises a main house, guesthouse, garage, and studio (which serves as the headquarters of Barton Myers Associates, Inc.)—is nestled into three terraces carved into the landscape.

Constructed from glass and steel, the structures all feature massive, industrial, steel garage doors. These roll-up doors open the home to the surroundings, erasing the boundaries between indoors and outdoors—and also seal the home off from potential fire hazards. “In 20 to 30 minutes, I can pull all the shutters down and create a safe refuge,” says Barton.

The complex was put to the test during the Thomas Fire, a massive wildfire that started in December 2017 and devastated much of Ventura and Santa Barbara Counties. In fact, according to Barton, the home served as the fire stop for Toro Canyon: “Although some 30 acres burned, the developed six acres did not due to the well-designed landscape, and the non-combustible structures were untouched.”

The roofs of the main house, guesthouse, and studio hold shallow pools of water, which serve as backup water sources. Even the surrounding landscape had been planted with fire mitigation in mind: a wall of cactus, filled with water, surrounds the inner gardens and helped to “stop the fire dead. It was incredible,” says Barton.

949 Toro Canyon has received accolades and awards from organizations like the American Institute of Architects, and has been published extensively, notably in American Masterworks: Houses of the 20th and 21st Centuries, which proclaimed the residence “one of the 40 most important works of residential architecture in the last 120 years.”

However, after the loss of Victoria, his wife of 60 years and the CFO of his firm, last year, Barton made the difficult decision to sell the place he has called home for the past 22 years. Scroll ahead for a look inside this very special property.