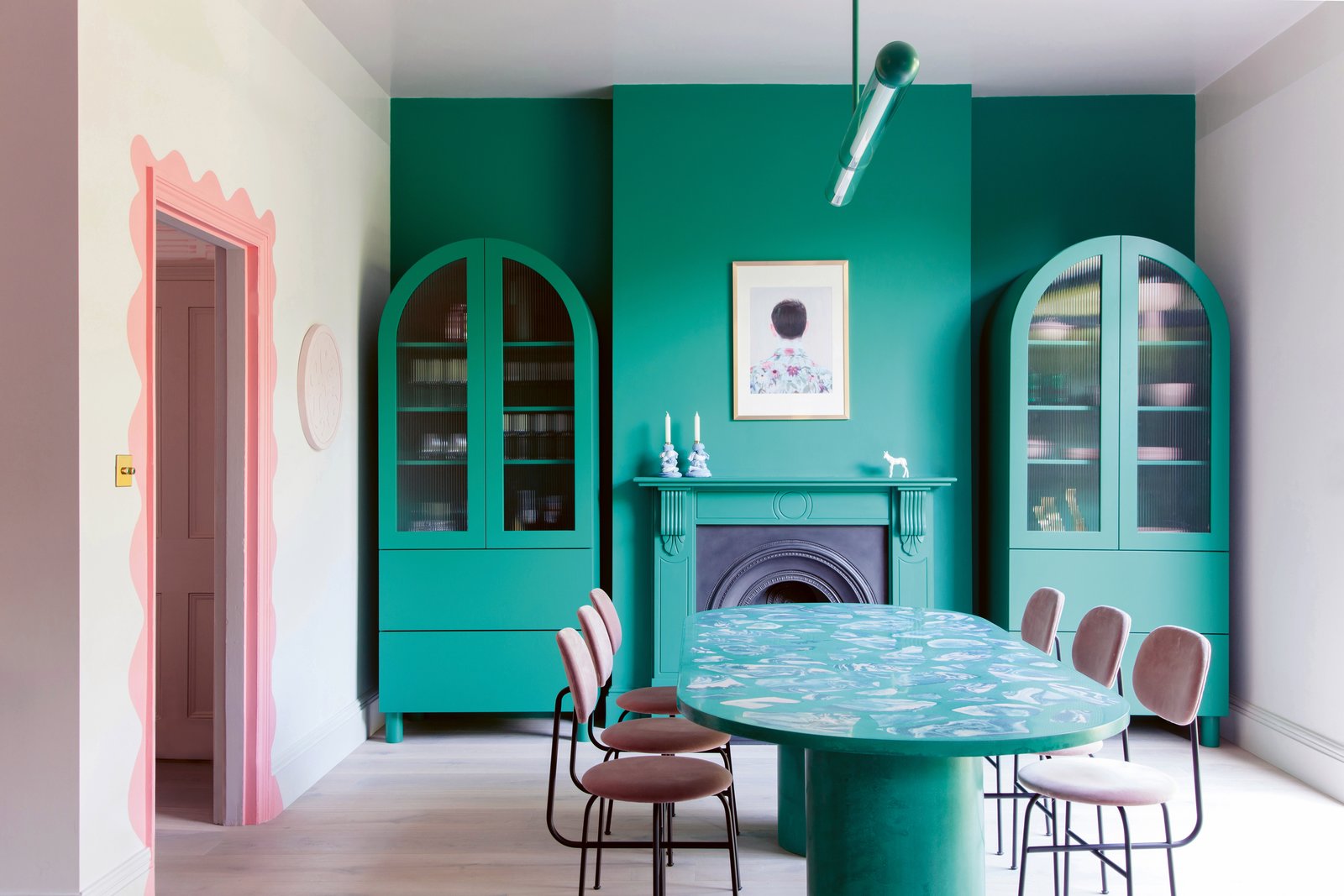 2LG Studio was founded in 2013 by married couple and British interior design duo Russell Whitehead and Jordan Cluroe—fondly known as the 2 Lovely Gays—based on a mission to make living lovely.

“”Lovely’ is everything that makes you who you are and who you want to be,” they say. “Lovely is kind, but it can also be excellent…Our hope is to make you feel confident in making your own choices and executing your creativity in your own time. No pressure, just happy homes.”

“From day one, we had the hashtag #makinglivinglovely,” says Cluroe. “When we started the studio, we put it out to the universe that we wanted to make a book, and we mocked up a fake cover for a book called Making Living Lovely with our picture on the front.”

Now out in the real world, Making Living Lovely is, in many ways, a response to the impact of social media on design. While platforms like Instagram and Pinterest can offer an endless source of inspiration, they can also create a pressure to design spaces that look like “that perfect Instagram shot.”

The book not only gives readers the tools to create an inspiring home, but also insight into the 2LG Studio design process, which involves developing an “interior roadmap.” The book features 10 completed residential projects—including the couple’s own home—as well as interviews with eight designers from around the world. It also delves into how Whitehead and Cluroe work together—and there’s a whole chapter on “Cohabiting without Compromise.”

Our approach isn’t about following strict “design rules.” Instead, we want to give you the tools to create a lovely home that both is inspired by you and inspired you every day.

“Making Living Lovely is for everyone, not just interior design fanatics,” says Whitehead. “We all live in spaces, and everyone can do something with that space—whether they rent, own, or share. ‘Design’ has become a kind of scary word and can be put up on a pedestal or have all this mystery around it. We want to remove that barrier and say that design is for everyone and is a really important factor in all of our lives.”

Read on to discover five design tips from Making Living Lovely to ignite your own passion for interior design and bring joy into your home.

Put Lipstick on Your Doors

When Whitehead and Cluroe were working on their kitchen extension two years ago, they started questioning why they should adhere to the strong, square shape of a door. “We thought, ‘Why not play with it?’” says Whitehead. “There’s nothing more fun than putting some lipstick on, so we started brainstorming different shapes around the doors, painted it, and fell in love.” Since then, it’s inspired a rug collection and countless Instagram posts.

“Part of our joy in designing is disrupting things,” says Cluroe. “We wanted to play with the beautiful timber architraves around the door of our period property and, in a literal sense, paint outside the lines. It is a little bit of rebellion against strong architectural features.”

“We took inspiration from the hand-printed murals and decorative interior detailing of the Bloomsbury Set and from Ettore Sottsass, founder of the iconic Memphis movement,” says Cluroe. “I love the idea of getting the paintbrush out, being creative, and just trying something.”

Making Living Lovely has a step-by-step guide to painting “lipstick” on doors, from deciding the shape and number of curves, to marking the design out on the wall, and filling it in with paint. “The hand-painted quality is what makes it special,” they advise. “So don’t be a perfectionist, and let it be organic.”

Punch Up Your Walls With Washi Tape

Originating in Japan, washi tape is a decorative masking tape that comes in a myriad of colors and patterns, from graphic zig-zags to pretty pastels. While it’s traditionally used in gift-wrapping, 2LG Studio prefers to use it to give walls a makeover.

“We came across washi tape two years ago at Paris design fair Maison & Objet, and it is just amazing what you can achieve with this relatively simple and very easy-to-apply tape,” says Whitehead. “We used it for this project as we wanted something that was dynamic and inexpensive, as it was for quite a large area, and the budget on the particular project wasn’t huge. It was a simple way of getting a big impact.”

Making a statement with washi tape is also a good solution for renters, say 2LG Studio. As it is low tack, you can apply it and remove it without damaging walls. “If you’re feeling brave, and you want something more permanent, you can use masking tape to create an impact with painted stripes as well,” says Cluroe. “There’s both options, depending on how flexible you are.”

Go Bold in the Bathroom

When it comes to kitchens and bathrooms, most of us are likely to be fairly conservative—after all, these are parts of the home that we tend not to change too often. For 2LG Studio, however, there’s no need to shy away from your true self in your bathroom. According to the principles of “making living lovely,” these rooms deserve to be celebrated and brought to life with color and personality.

“People tend to ignore bathrooms and kitchens, but these are the spaces where we go more wild,” says Whitehead. “Personality should not be lacking in your bathroom. That’s why we are often very bold with color there. Once you start to live with color, you can’t go back.”

“Bathrooms are often the way that you start your day,” says Cluroe. “For us, that means we want energy. We want the bathroom to invigorate us and wake us up and bring us to life and set us up for the day. So, we like quite dramatic, colouful bathrooms that make us feel uplifted.”

Put Wallpaper on Your Ceiling

According to 2LG Studio, wallpaper isn’t just for walls. It should also be applied to the ceiling—an often forgotten expanse that they call the “fifth wall”—as a way to bring some extra color and pattern to a room.

“We believe the ceiling is one of the great undiscovered areas in interiors,” says Whitehead. “For so many years, people have had white ceilings. By wrapping the pattern and color everywhere, it creates a more calming effect—it’s also a great talking point. It’s nice to create moments of impact and surprise throughout a property.”

“If you’re trying to create a dramatic statement in a dining room, a contrasting wallpaper is a really exciting moment to look up to,” says Cluroe. “In a hallway, it’s nice to have a clean statement where the same pattern wraps around.”

They do, however, caution against using a wallpaper with a linear pattern. “Stripes can look a bit odd when they go in one direction on the ceiling,” says Whitehead. “Something with a softer pattern works better—it’s all about proportion.”

Give Your Home Some Bling With Lighting

When it comes to both lighting and jewelry, Whitehead and Cluroe believe in making a statement. “Lighting is often the thing that people get wrong in their homes,” says Cluroe. “It’s often too small, and the scale is just wrong.” So, the pair tend to opt for large-scale pendants, which—like a statement necklace—have the potential to define a look.

“Design is a bit like dressing,” says Cluroe. “For us, lighting is the accessory that is the cherry on top and lets you add a bit of excitement to a room. People often feel more confident with what they wear than with interior design, so we hope that by making jewelry relatable to lighting, they might take a more playful approach.”

The creative pair’s advice is to plan the location of pendant lighting early on in a project for ease of installation, and don’t forget about functional and architectural lighting—which is covered in a separate chapter. “A pendant is one element in a lighting scheme,” says Whitehead. “It doesn’t need to be too functional if there are other elements of functional light around it. It can be there to create that big, bold statement.”

“We all need to learn how to get the most out of the spaces we live in,” says Cluroe. “Making Living Lovely is about trying to go back to basics and help readers find their style and deliver it. It’s about the joy of the creative process and allowing people to discover that joy for themselves.”

Parquet – things to know before buying