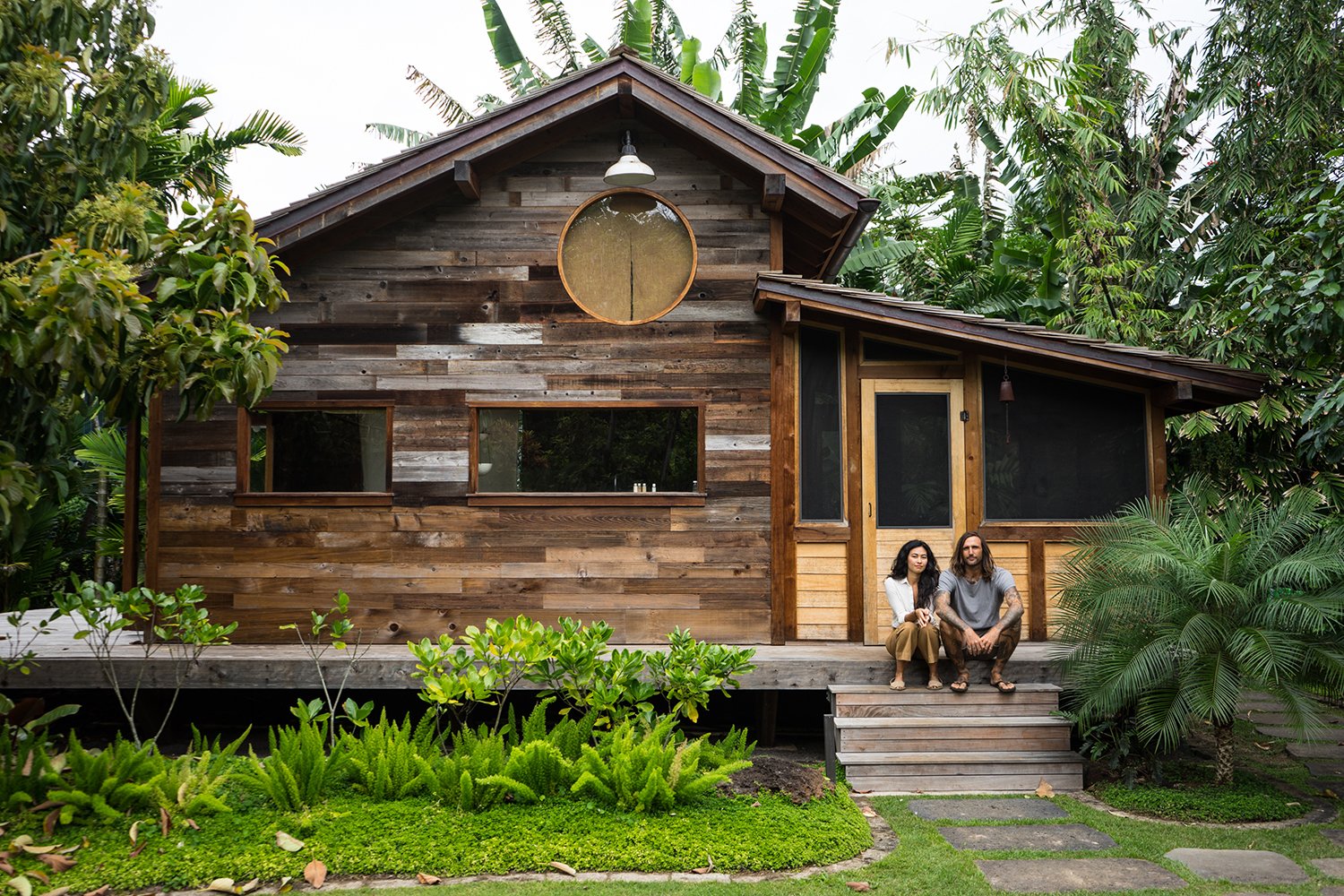 From candy-colored tiny homes to treehouses to bohemian-style small spaces that connect to nature, these 10 micro houses are all you need to live your best life in the Hawaiian Islands.

After finding paradise on a Hawaiian papaya farm, filmmaker Jess Bianchi and jewelry designer Malia Grace Mau commissioned San Francisco artist Jay Nelson to design and build their dream home in just five weeks on the island of Kauai. The home, inspired by Hawaiian surf shacks, was built mostly with reclaimed redwood fencing and is located one block from the beach. “There are roosters, rabbits, and fruit trees on the property and you can hear the waves when you go to sleep at night,” Bianchi says.

Designer Kristie Wolfe built this bamboo treehouse that sits on fifteen-foot-high stilts and features a hanging bed on the open-air ground floor. A trap door accesses the second level, which is enclosed and features a wraparound lanai and panoramic views of the lush jungle surround. The treehouse, available to rent via Airbnb, is just ten miles from Volcano National Park.

Set on a Volcanic Lava Field, The Phoenix House is located in Pahoa, Hawaii, at the base of Kilauea Volcano. The wood-clad tiny home, designed by Will Beilharz and built by ArtisTreeHomes, is an off-grid cabin that features stark views of seemingly endless black lava fields. The tiny home provides a minimalist experience that’s available via Airbnb. Not far from the cabin are festive farmers’ markets, coastal drives, and black-sand beaches.

Located just one mile from Kealakekua Bay in Captain Cook, Hawaii, this bohemian-style tiny home is marked by its open-air ground floor, where the kitchen, living room, and dining are enveloped by lush plantings and trees. The second-level bedrooms are separated from the outdoors via screens that supply a treehouse experience.

Habitats Hawaii builds custom, sustainable tiny houses on the Big Island of Hawaii. All models, which are solar-ready and wired for 110 volts, feature metal roof gutters that collect rainwater. The tiny homes are built on a steel chassis with wheels so that they can be moved anywhere, from mountains to shorelines. Built-in decks and lanais facilitate a connection to the outdoors.

Oasis Tiny Home was built by Paradise Tiny Homes, a company in Keaau, Hawaii, that was established by Dan and Ellie Madsen, a brother-sister team. The design showcases a large oculus-like window that floods the living room with natural light and ties the home to nature. A large, rectangular window and a mango wood counter on the exterior offers a bar experience on the outdoor deck. And in the bathroom, a skylight in the shower provides the feeling of bathing outdoors.

This eco-friendly tiny house in Kailua-Kona, Hawaii, is situated on three acres of land known as Big Island Tiny Village with two other tiny homes: the Manini Unit and the Ohia Unit. Clad with wood, the interior of eco-friendly tiny house is also finished with a wood ceiling, walls, and flooring. The open floor plan and the outdoor areas, which include a fire pit and a large covered dining area, facilitate spending time with family and friends.

Designed by Will Beilharz and built by ArtisTreeHomes, The Ohana House in Pahoa, Hawaii, is two square volumes separated by a courtyard area that can be used for sitting, dining, and planning family adventures. The compact residence is situated on the Kalapana lava beds near the base of the Kilauea Volcano, an area considered to be the sunniest and driest part of the Big Island.

This 12-sided home, located in Pahoa Hawaii, showcases vaulted ceilings and a central skylight that brightens the wood ceiling, walls, and flooring. Expansive rectangular window blurs the line between the interior and the outdoors. A private pool and an outdoor shower allow for swimming and bathing in the epic landscape, surrounded by fruit trees, lush greenery, exotic flowers, and a lava-rock wall.

Thank You Cards For Business